The Heat director Paul Feig chats with SheKnows about “dream team” Sandra Bullock and Melissa McCarthy, and why he hates the term chick flick.

Director Paul Feig of Bridesmaids is back with another female-fronted comedy, The Heat, and he’s telling SheKnows why there need to be more movies outside of rom-coms that focus on women.


Paul says that Sandra Bullock and Melissa McCarthy were the perfect duo to play tough, crime-fighting women in his new action comedy.

“That pairing to me was like, ‘Wow, they’re like a dream team,'” said Feig. “This was really important to me because I wanted to take it fully out of any romantic, chick-flick world, and just [focus on] two very strong, empowered women who are great at their jobs.”

Bullock and McCarthy agreed that they were excited to play no-nonsense women who can hold their own in a male-dominated workforce.

“We didn’t want to play silly women who don’t know how to hold a gun,” McCarthy told SheKnows. “We wanted to make sure they were both really, really good at their jobs. They might not be the most socially skilled, but they’re really amazing law-enforcement officers.”

And their social skills are exactly where the comedy comes in. One particularly hilarious scene features Melissa and Sandra getting to know each other over a few glasses of whiskey. Paul says most of the antics here were all improvised.

“They were just so inventive,” said Feig. “I set that up with this table with checkers and shot glasses and then I go on the side of the camera and I come back, and they’ve Scotch-taped their noses up on their foreheads and Melissa’s taped two forks to her fingers.” 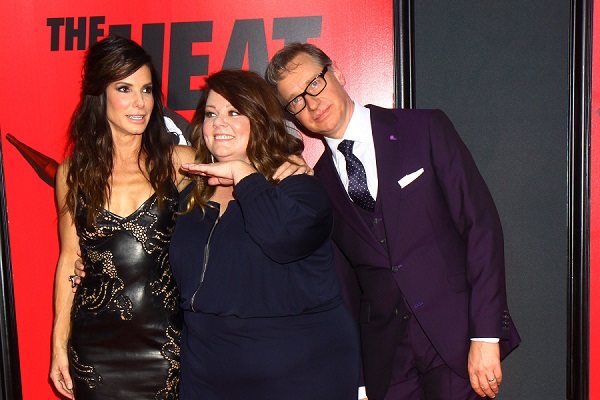 It’s that kind of comedy that Feig wants to see more of from actresses.

“Bridesmaids looked like a chick flick to guys, but then when they went to see it they were like, ‘Oh, no. This is just about these funny people and they just happen to be women,'” said Paul. “It’s ridiculous that it’s 2013 and we’re the only studio film starring women that’s coming out this summer. I hope there’s more movies like this.”

Be sure to catch Sandra Bullock and Melissa McCarthy in The Heat, in theaters today!