Beloved South African leader Nelson Mandela is still fighting and alert, but his condition is “frail,” according to his daughter. 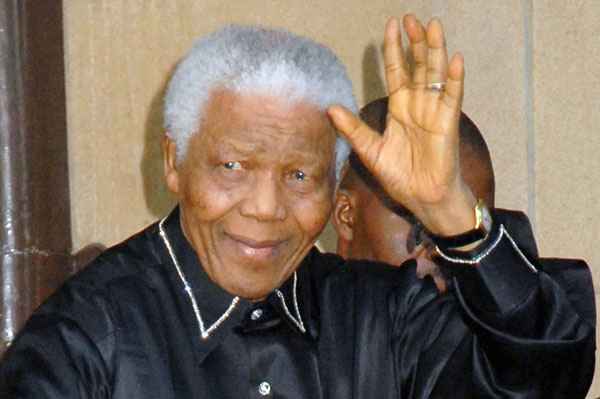 Nelson Mandela’s daughter wants to make one thing clear: The 94-year-old former leader is still alive and alert — not dead, as some online reports claim.

“He is with us,” Zindzi Mandela told NBC on Thursday, adding that his condition is “typical for a 94-year-old man whose health is frail.”

His eldest daughter, Makaziwe Mandela, told SABC radio that he’s “still there,” but things are serious.

“I won’t lie, it doesn’t look good,” she said. “But as I say, if we speak to him, he responds and tries to open his eyes… might be waning off, but he’s still there.”

“The medical team continues to do a sterling job,” he told reporters on Thursday, adding that Mandela is doing “much better.”

Meanwhile, dignitaries around the world continue to send their well wishes to the anti-apartheid leader.

“I’ve had the privilege of meeting Madiba and speaking to him,” President Barack Obama said during an appearance in Dakar, Senegal on Thursday, affectionately referring to Mandela by his clan name.

President Obama added that Mandela — a former political prisoner held for 27 years — was particularly influential to him during his college years.

“For him to say, I embrace my former captors and my former oppressors, and believe in one nation and believe in judging people on the basis of their character and not their color,” Obama said, “It gave me a sense of what is possible in the world when righteous people, when people of goodwill work together on behalf of a larger cause.”

“He’s a personal hero, but I don’t think I’m unique in that regard. I think he’s a hero for the world,” Obama continued. “And if and when he passes from this place, one thing I think we’ll all know is that his legacy is one that will linger on throughout the ages.”