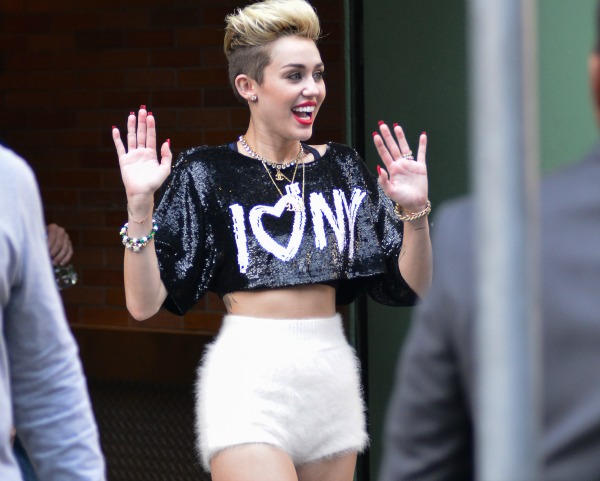 Hitting the trail in blazing saddles

After releasing her “Hello! Did she really just do that?” video “We Can’t Stop,” where Miley Cyrus writhed around in second-skin pants and platform sneakers, she hit the live TV circuit to perform. But there was something missing. What was it? Live vocals? No. A couch full of people to grind on? No. Oh yeah, Miley forgot her pants! This girl has had a lot on her mind lately with her impending nuptials while her parents are divorcing. It’s easy to let things slip your mind. Like putting on a pair of pants. Miley started this trend in her video where she spazzed out for a few seconds in her underwear.

Doin’ whatever she wants

Ah, that was fun, wasn’t it? So much fun in fact that Miley decided pants were overrated and that she would take her “no pants dance” on the road. That’s exactly what she did when she appeared on Good Morning America on June 26. Remember, Miley’s going to do whatever she wants, and according to her new video, she’s surrounded by sweaty bodies. Maybe that’s why she’s decided it’s time to dress down.

Miley Cyrus: I really heart my… >>

Before Miley hit the GMA stage, she was asked if she’s still engaged, to which she answered, “I’m wearing a ring, so…” How mysterious. And to the people who don’t love her new video (that broke the Vevo record for most views in 24 hours)? Miley addresses the haters by saying, “They haven’t been to a good party in a while.” She went on to say, “My whole thing is haters are going to hate, but the haters are also going to click on your YouTube video to watch it, so I really don’t care. And I look good in my underwear, so deal with it.” (Yes, we made the last part of that quote up.) Before Miley did the East Coast in her underwear, she rocked her West Coast undies on Jimmy Kimmel Live.

Would you please put some pants on?

I feel weird having to ask you twice. (You’re welcome, Hangover fans.) Miley startled her host Jimmy Kimmel when she came out sans pants. The host greeted Miley with, “I did not realize when you walked out that you were wearing your underpants.” Being pantless set the tone for the rest of the interview, where Miley confessed that she and Snoop Lion get along so well because they are both so high all the time. Huh. Well, the girl is No. 2 on the iTunes charts, so she must be doing something right. Maybe the underwear trend will stick. Sorry. Poor choice of words.

On a personal note, one of my favorite things about a self-indulgent, over-the-top video is the inevitable parody. So far, this is my favorite, and like the original, it is NSFW.