Kim Zolciak is pregnant with her fifth — and final — baby, but that’s not the only happy news the reality star and husband Kroy Biermann have to celebrate! 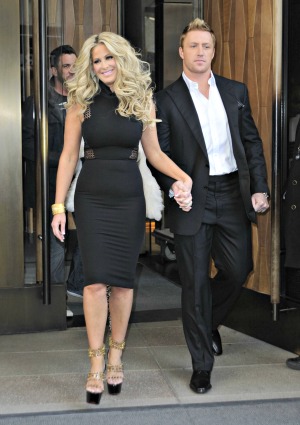 Kim Zolciak‘s 2013 pregnancy is a thing of rumor no more! The Don’t Be Tardy star has confirmed that, not only are her and husband Kroy Biermann soon going to be the parents of five, but he has officially adopted her two daughters from a previous relationship!

“How exciting is that, love muffin?” Kim Zolciak went on to say to her Atlanta Falcons footballer husband. “You did it again, lovey… Are you excited, love muffin? It must be the athlete sperm.”

The happily married pair, seen here in March leaving the 2013 Bravo Upfronts party in New York City, have already welcomed 2-year-old son KJ and 9-month-old son Kash since marrying in May of 2010.

This time, it’s no secret the former The Real Housewives of Atlanta star is hoping for a girl.

“I personally would love a little girl, because Brielle’s going to be 18 soon, [and] Ariana’s six years away from being 18,” she went on to say to Biermann during the episode. “If this next baby is a boy, she’d be alone in the house with three sons and her husband once the girls went off to college… That’s a life of four-wheelers and football.”

“This is it,” she added, explaining her fifth pregnancy is to be her last. “You better hope you get a little girl, because this is it!”

Tweeting about his newly official role as father to 16-year-old Brielle and 12-year-old Ariana, Kroy Biermann wrote Tuesday, “One of the happiest days of my life was the day that @BrielleZolciak @arianazolciak legally became mine!! I love you girls!!”

Brielle kindly shared, “I have the best dad ever @biermann71.”

Do you think Kim Zolciak’s fifth baby will be a boy or a girl?