Following in the footsteps of Miley Cyrus, Justin Bieber and Katy Perry is One Direction. The pop group is headlining their own concert movie. Not only do we have the trailer for One Direction: This is Us, but we also have a few tips to throwing your own 1D viewing party. 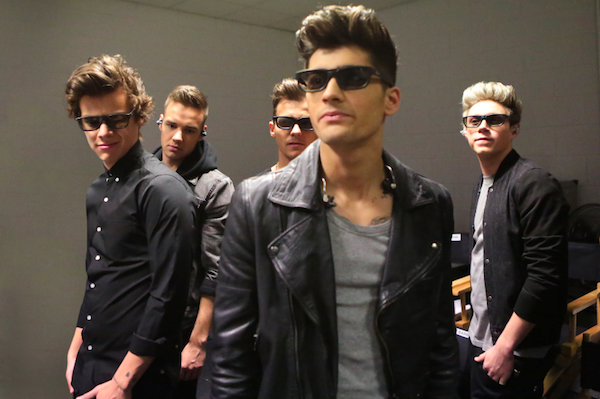 One Direction wants you to go on tour with them. The boy band stars in their own documentary called One Direction: This is Us. It takes fans behind the scenes and on the road with the international group.

One Direction: This is Us is an inspiring tale following Niall, Zayn, Liam, Harry and Louis’ rise to fame. Most of us met them during their run on The X Factor which they surprisingly didn’t win. These days, they’re selling out tours all over the world. Plus, their music has topped the charts in more than 37 countries.

In the film we get a glimpse of the band’s humble beginnings. We’re taken back to old jobs and old neighborhoods where they were raised. There are many touching moments between them and their families. You see first hand how their constant traveling affects their parents, especially their mothers.

One Direction fans also get screen time in the film. They explain why the group is so successful and what makes them stand out. One girl says, “I know they love me even though they don’t know me.” Another chimed in with, “They always make fans laugh.” Cut to footage of Harry getting pranked on stage.

Leading up to the live stream premiere of the film — which takes place August 20 in London — take things one step further and take One Direction home with you. That’s right, you can throw your very own One Direction: This Is Us premiere party. Just download the party pack, which includes movie-themed graphics, invitations and more.

One Direction: This is Us is directed by Morgan Spurlock (Super Size Me) and produced by Simon Cowell. The film opens in theaters Aug. 30 in both 3-D and Real3-D.

More about One Direction