Jonah Hill is a serious actor with seriously influential friends — and he doesn’t mind telling you about it. 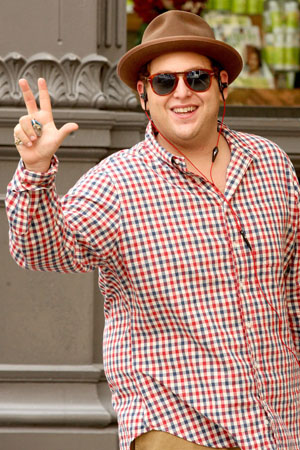 Jonah Hill might’ve built his career in comedies like Superbad and 21 Jump Street, but he’s also done a few dramas — and he wants to be known as a true artiste.

At least that’s the vibe we’re getting from a few quotes Bullet magazine cut — and then released to Salon — from their profile on the actor.

“You can dis me all you want on a blog, or write whatever you want in this magazine and I’ll just be like, ‘Whatever, man. Scorsese thinks I’m awesome,'” The Wolf of Wall Street actor joked to Bullet. “He hired me and didn’t fire me, so I can kind of not care now.”

We’ll give it to Jonah: That’s pretty impressive. However, his excessive name-dropping makes it seem like he’s got something to prove. Then again, we’d probably do the same thing if Brangelina and Leo showed up at our parties.

“When Brad and Angie [Jolie] came to my birthday party last year, I think that was pretty shocking to a lot of people because that was at a small bar, but my birthday party this year was at my house and, um, some of the guys from The Wolf of Wall Street came over,” he said.

“My friends weren’t like, ‘Oh my gosh! A famous person’s here.’ More than that, it was the actors there who were like, ‘Man, it’s so awesome how close you are with all these people who don’t give a f**k that you’re in movies or that anyone else is in movies.’ Because no one cared that Leo [DiCaprio] was there.”

Hill also makes it clear that his star is rising in Hollywood — and he’s getting the roles usually given to other A-listers.

“I knew that I was being considered among a list of other actors, but not my contemporaries — Andrew Garfield or Joseph Gordon-Levitt — people who are usually up for the same stuff as me,” he said of his role in The Wolf of Wall Street. “I was hearing names like George Clooney.”

Ego or not, the interview shows that Hill is still appreciative of fans. The Bullet reporter notes several happy interactions with fans in the article — and he seems genuinely happy about his lot in life.

“I am the luckiest guy. I have the best family and friends in the world,” he said.