Now that DOMA and Prop 8 have been struck down, will Brad Pitt and Angelina Jolie finally marry? 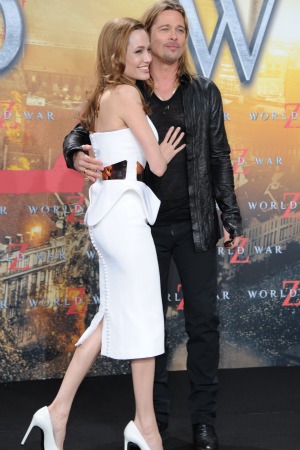 They have six kids together, have been engaged for over a year and show no signs that the thrill is gone — so when will Brad Pitt and Angelina Jolie get married?

The couple famously said they would wed when it was legal for everyone to do so, a nod to their support of gay marriage. “Angie and I will consider tying the knot when everyone else in the country who wants to be married is legally able,” the actor told Esquire back in 2006.

Now that the Supreme Court has struck down DOMA and Prop 8, does that mean we’ll be hearing wedding bells for Hollywood’s hottest couple?

The Supreme Court’s decision does not make gay marriage legal across the land. By overturning DOMA they effectively allow the federal government to recognize same-sex marriages performed in states where it is legal — currently 12, soon to be 13 once the overturning of California’s Prop 8 is put into effect. That leaves 37 states where it is still not legal for everyone to marry.

So, if Brad and Angie are to hold to their word, we still have a while to wait.

Pitt and Jolie are staunch advocates for marriage equality. The couple donated $100,000 to the Human Rights Campaign’s National Marriage Fund in 2012.

“Every person’s right to life, liberty, and the pursuit of happiness is enshrined in our country’s Declaration of Independence, but powerful, well-funded groups are flooding the airwaves with lies, trying to take away those rights from certain people… and we can’t stand for it,” he said in a statement on the HRC website.

“No state should decide who can marry and who cannot,” Pitt told People in 2011. “Thanks to the tireless work of so many, someday soon this discrimination will end and every American will be able to enjoy their equal right to marriage.”

Verdict: Jennifer Aniston will walk down the aisle before Brad and Angie.