Is Lewis Hamilton planning to pop the question to girlfriend Nicole Scherzinger?

Nicole Scherzinger and her boyfriend, Formula 1 driver Lewis Hamilton, have had their share of ups and 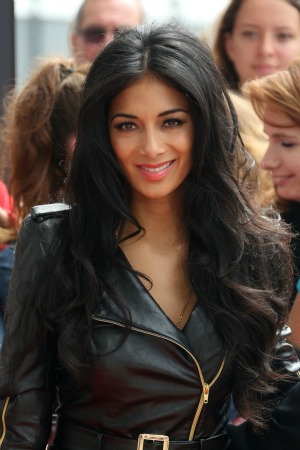 downs over their five-year relationship. She was kicked off the American version of The X Factor, but was quickly snatched up by the British version. At one point, there were even rumors that the couple had split up and just last year, Scherzinger was seen getting very close to Chris Brown in a club.

All of that appears to be behind Scherzinger and Hamilton now and it looks like things might be getting serious between the two. Recently Lewis spoke to British newspaper The Sun about speculations surrounding whether or not he and Scherzinger were going to get engaged anytime soon.

Celebs who could totally have a secret sibling like Demi Lovato >>

“We’ve been together for five years, which is quite a milestone really,” Lewis revealed. “But hopefully in the near future. Maybe before we get to six years.”

Before they get to six years? If Lewis was talking specifically about a wedding, then it would stand to reason that they could already be engaged. Anyone who knows anything about planning a wedding knows that things need to get started months, if not years, in advance.

But don’t get too excited just yet — apparently Scherzinger’s representative quickly shot down any engagement speculation when asked to confirm the news. Also, this isn’t the first time that an engagement announcement was made that subsequently turned out to be false. Scherzinger’s dad publicly claimed they were in engaged back in 2011, but a wedding never happened.

Pussycat Dolls were a marketing sham, surprising no one >>

“You know about the proposal? Yes, they are engaged,” Scherzinger’s dad said back in 2011. “My future son-in-law is a really nice guy, really down-to-earth. My family all like him. The good spirit is there.”

Could the rumors be true this time or is it another case of someone jumping the gun?

42 mins ago
by Giovana Gelhoren