Oprah Winfrey is back on top where she belongs. Forbes magazine put her at No. 1 on their Celebrity 100 List for 2013. 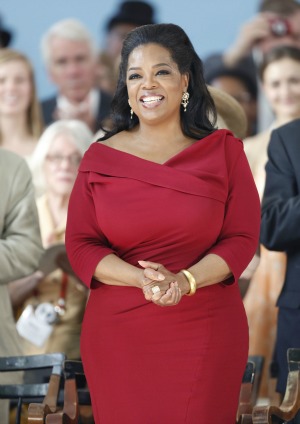 Oprah is back on top even without her syndicated show on the air. On Wednesday, Forbes magazine announced its 2013 Celebrity 100 List of the most powerful celebrities, and the media mogul is again at No. 1.

Winfrey spent two years in the No. 2 position, but she regained the lead this year after earning approximately $77 million in the last year. The business magazine measures the time period between June 2012 and June 2013.

However, wealth isn’t the only requirement to make it to the top of the leaderboard. They also looked at her level of fame with the number of mentions in social media and in the press. Her influence is powerful.

In fact, it was her interview with fallen athlete Lance Armstrong and her production deal with entertainment powerhouse Tyler Perry that helped her regain the top spot.

Winfrey also has some fantastic female company in the top 10. Women earned six slots on the top 10 list with Lady Gaga following immediately behind Oprah. Beyoncé (No. 4), Madonna (No. 5), Taylor Swift (No. 6) and Ellen DeGeneres (No. 10) also rounded out the list.

The category that seems to be the most influential involves musicians with Lady Gaga, Swift, Madonna, Bon Jovi (No. 7) and Justin Bieber (No. 9) representing their entertainment segment well in the top 10.

Newcomers that were added to this year’s top 100 list include Channing Tatum (No. 23), Jennifer Lawrence (No. 49) and Amy Poehler (No. 94). The list also said goodbye this year to a few notable names like Reese Witherspoon, Brad Pitt and Julia Roberts.

The cover of the current issue features country singer Toby Keith, who came in at No. 43. Forbes dubs him the “Cowboy Capitalist.”