Paula Deen begged the public to believe that she is not a racist in a tearful interview on the Today Show on Wednesday. Should we believe her? 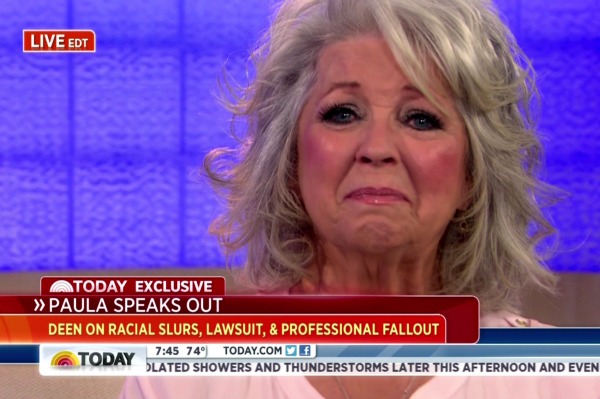 Paula Deen is “distressed” that millions of people have passed judgment on her, breaking down on the Today Show while talking about the week that has nearly ended her career.

Deen appeared on the morning news program just days after canceling her originally scheduled appearance. Later the same day she issued two emotional apology videos that did little to help save her hide.

“I’ve had to hold friends in my arms while they’ve sobbed,” Deen said, crying herself. “Because they know what’s being said about me — it’s not true. And I’m having to comfort them, and tell them it’s going to be all right. If God got us to it, he’ll get us through it.”

The accusations stem from a deposition the TV cook gave in a sexual harassment lawsuit in which she and her brother stand accused of committing multiple acts of racism, violence and discrimination resulting in the end of former restaurant manager Lisa T. Jackson’s five-year tenure at Uncle Bubba’s Oyster House and Deen’s Lady & Sons. “There’s someone evil out there that saw what I had worked for and they wanted it,” Deen said, stopping short of naming Jackson.

Yet Deen does not regret telling the truth in her deposition. “No. Because there’s a couple of kinds of people that I don’t like, that I am prejudiced against: … thieves and liars.”

She explained that the last time she used the racial slur in question was 30 years ago “when a black man burst into the bank that I was working at and put a gun to my head.”

“I had gone out on a limb for him and gotten him a loan and he was frightened that I was going to recognize him.”

When asked in her deposition if she had used the N-word since, she answered, “I’m sure I have, but it’s been a very long time.”

Since the news came to light last week, Deen has lost a lucrative deal with Smithfield Foods, her partnership with QVC to hawk her cookbooks and cookware is on the line, and Food Network declined to renew her contract — moves that have left Deen devastated.

“I’ve had wonderful support from Rev. [Jesse] Jackson, and I tell ya what: If there’s anyone out there that has never said something that they wish they could take back, if you’re out there, please pick up that stone and throw it so hard at my head that it kills me,” she cried. “Please — I want to meet you.”