Ali’s face is everywhere thanks to a creepy mask she had made of herself. And the liars discover she’s not the only one who wanted to be immortal in Rosewood. 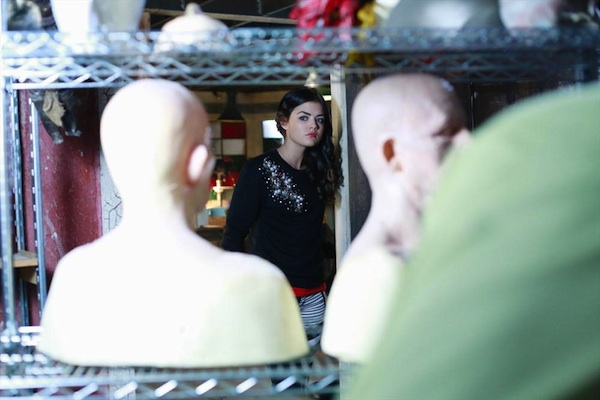 Ali’s narcissism leads the girls to a potential clue this week on Pretty Little Liars, but is it enough evidence to find A? Of course not! The season’s just getting started. From what we know of the show, this is the tip of the iceberg.

The girls are looking through the stuff Emily (Shay Mitchell) got, and they find a mask.

Zach invites Ella on his trip to Austria, but she turns him down because she feels like she can’t leave Aria (Lucy Hale).

Melissa arrives back in Rosewood from Washington, and Spencer (Troian Bellisario) accuses her of killing Walden by way of a “Welcome back.” Melissa responds that it might be best for both of them to get out of town, if they know what’s good for them.

Hanna (Ashley Benson) asks her mom what happened in New York. Ashley says the most interesting thing she did was go to the show Anything Goes with her coworkers.

Emily visits the doctor about her shoulder. He doesn’t believe she fell off her bike but offers her something to help with the discomfort. She doesn’t want any pills.

Stay up to date on all PLL news! Subscribe to the SheKnows newsletter >>

The case of the missing pills

Hanna visits her mom’s office and snoops. Ashley received some flowers and a note that said, “Hope you’re feeling better. The show was a dud, you didn’t miss anything.” Hanna holds up the note when her mom comes back into the room and then leaves without a word. Her mom tries to explain, but Hanna leaves too quickly to hear.

Emily’s mom Pam shows up at school and demands to know why seven of her hydrocodone pills are missing. The doctor called Pam when Emily refused a prescription. Emily tries to walk away from Pam without explaining to her, but Pam grabs her arm and tells her to get in the car.

Caleb tells Hanna that maybe talking to an attorney would be in Ashley’s best interest. He thinks Ashley is innocent but says things don’t look good. Hanna goes to the police station. Inside, Hanna sees Melissa talking to the detective.

Caleb goes to see Hanna’s dad, Tom, and tells him about Ashley and her suspicious connection to Wilden. Tom only says he’ll keep the information in mind.

Ashley confronts Hanna about snooping through her things. She won’t answer Hanna’s questions about her whereabouts in New York. She tells her not to ask any more questions and then asks Hanna to cover for her and not tell anyone she didn’t go to the show.

Later that night, she and Aria begin going through Ali’s journals. Aria is looking at the mask and pulls the disguise off. The face underneath looks just like Ali.

The girls figure out where the mask was made and head to the studio to ask the creator some questions. The man they meet sees the mask and tells them they’d better come inside. He agrees to tell them what he knows if they allow him to take a mold of Emily’s face. While he makes the mold over Emily’s face, Aria asks questions and Hanna snoops around the studio. Hanna uncovers a mold of Melissa’s face in the studio too. 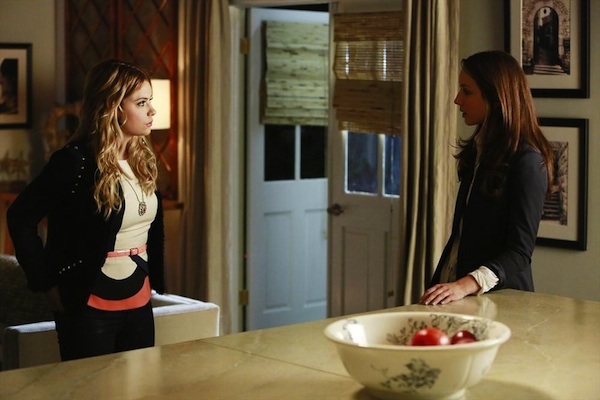 Meanwhile, Spencer sneaks into Radley with Toby. They go to the room where Toby’s mom jumped. Toby reenacts his mom’s last moves and realizes he gave the RV to A for nothing.

Spencer looks out the window though and sees there’s a roof that juts out 10 to 15 feet all the way around the building. It wouldn’t make sense that his mom cleared that ledge and then fell to the ground. Spencer doesn’t think Toby’s mom jumped, at least not from that window.

Ashley was in Rosewood

Tom finds Caleb. Ashley wasn’t in New York the night of the murder. She was in Rosewood. Tom saw her because she came to his house asking for money. He didn’t give it to her and then she left. He tells Caleb a gun he always keeps in his desk went missing that night.

Pam is worried because family services called and wants to interview her. Someone saw Pam and Emily’s confrontation outside of the school and thought Pam was excessive. Family services say they detect a pattern of injuries due to Emily’s shoulder and her past ulcer.

Aria knows how much Ella wants to go to Austria with Zach and encourages her to go. Only after Aria’s insistence does Ella agree to the move.

Emily’s got a shoulder of hurt

Hanna arrives home, and Ashley’s in the shower. They apologize to one another through the door. Hanna senses something is strange but doesn’t go inside. Cut to inside the bathroom. Ashley isn’t actually in the shower. She’s just filling the sink with soapy water for an unknown reason.

Spencer asks Melissa why she was at the police station. Melissa explains the new detective wanted to ask her some questions about Wilden. Melissa wants to know if other sisters struggle so much to get along.

Pam tells Emily her dad is coming home. Family services called him too.

A gloved hand pulls out a record and plays “Dem Bones,” while an x-ray appears of Emily’s shoulder. It’s not just sore. It’s disconnected.