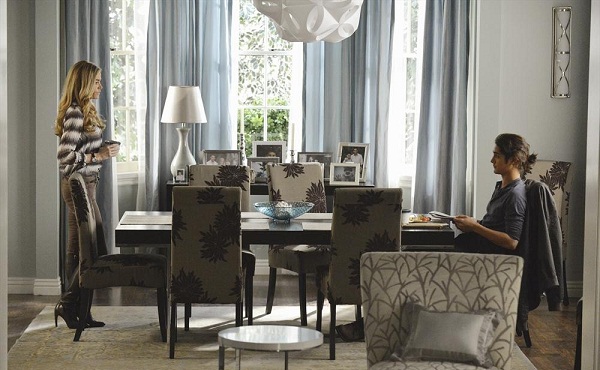 The town of Green Grove is still convinced Danny Desai killed Regina and even Sheriff Masterson seems hell bent on proving Danny’s guilt. So, what’s a guy to do when he can’t catch a break? Try every way possible to get back into the good graces of one of his former friends, of course — even if she’s vapid and completely unworthy of him. He has plenty of obstacles to overcome first, though.

Karen Desai (Denise Richards) is a well-meaning mom. However, as she tries to help her son escape a return trip to juvie, she doesn’t make things easy for Danny back at school. As Sheriff Masterson narrows in on Danny, Karen tries to help her son with his alibi by informing Masterson that Lacey spent the night at her house the night Reggie was murdered. Sure enough, when Lacey shows up at the sheriff’s department to give her statement, Sheriff Masterson admits he already knew she’d spent the night. He tells her Jo didn’t tell him, but no more than that. Lacey immediately assumes it was Danny who told on her and becomes even more of a jerk to him than she already was. (Never mind the fact that he had every right to say so and, if she weren’t such a B, she’d have already done so herself.)

Karen had good intentions, though, because she believes in her son’s innocence… though he’s quickly making that hard to swallow even for his mom. When Sheriff Masterson shows up at Danny’s house to question Karen about the picture of Aunt Tara that went missing midway through the Mastersons’ visit to the Desai household, Karen plays it cool but realizes it was Danny who hid the picture. Upon further investigation, she finds all the pictures of Danny’s aunt are missing. Why? Danny says it’s too morbid. Karen admits she knows about the necklace, though. What’s Danny really hiding?

A new way to wiggle in

With Lacey steamed over Danny’s supposed deceit, she’s giving him the cold shoulder and her boyfriend, Archie, is being meaner than ever. Danny needs to find a new way to get back on her good side.

Meanwhile, a mixture of a need to know more about Regina and the desire to prove Danny wrong about being an outsider lands Jo with new science partners. It seems awful at first, but by the end of the “experiment” she’ll realize how useful it was. 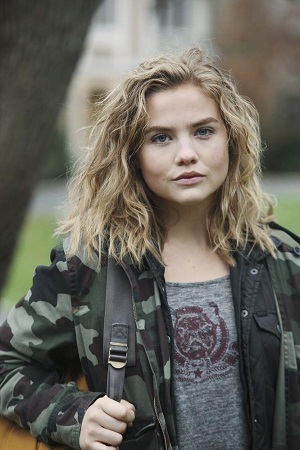 Sobriety day is here and the popular kids (including Lacey, her b****y friend and Archie) are taking part in a skit about drunk driving. Two problems: They’re idiots… and the skit is lame. Jo is convinced Danny’s social life would take great strides forward if he’d sign up to help with the skit and volunteers to join in on the “fun” with him.

The efforts prove disastrous. Danny takes it upon himself to rewrite the script and, while it’s actually quite good, Lacey’s B of a friend is written out (despite complaining constantly about the skit, getting kicked off really annoys her) and Archie refuses to work on something produced by Danny. In the end, it’s Danny, Lacey and Jo that do the skit. It ends up being quite the success. That is until the AV team (now including Lacey’s friend) is supposed to run the video on binge drinking. She replaced the video with a mash-up of shots from the time Jo stood up for Danny at the last assembly and when she got drunk at Regina’s party. She also, so kindly, plastered “Loser” all over the video. Poor Jo!

While Lacey is quick to hunt down Danny to make sure Jo is OK, she still refuses to let him in. If anything, she seems madder than ever before. So much for joining in, right?

In an attempt to make friends — or perhaps just annoy Archie — we leave the episode with news that Danny has joined the soccer team. Apparently, Coach likes the idea of a forward other teams are afraid of. Ha! Most parents would feel bad for their kid but, of course, Karen is happy.

She may not be for long, though. Sheriff Masterson spent this week in a furious attempt to find a copy of the picture of Aunt Tara from the Desai house. Just when it seemed like he’d failed, he made the discovery at his house. While helping his wife clean out the garage, he rummaged through a box of old photos of Jo. A photo from a birthday party was in the mix and there stood Aunt Tara… in her/Regina’s necklace.

On the upside, Jo’s time with the popular kids and Rico’s forced interaction with his crazy new lab partner unearthed some pretty interesting tidbits. They found out that the night of the party, when Scott was hooking up with crazy-face, it was because he didn’t have his car. Archie was borrowing it. Archie told everyone he was at home the night of the party… so why did he need Scott’s car?

Furthermore, Archie is really good at controlling Lacey and even better at making Danny feel like scum. Is it possible he’s the real sociopath?

Tell us what you think!

Have the latest TV news delivered to your inbox: Sign up for our newsletter! >>