Free Birds won’t be home for the holidays. Turkeys are on the run in the new trailer for the animated film. 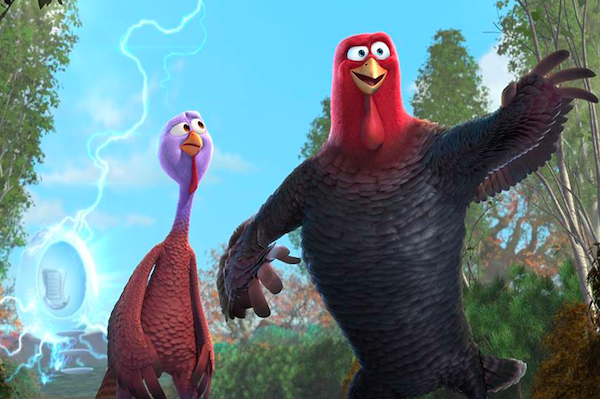 Could you imagine Thanksgiving without turkey? We know two characters that can and they want it off the menu. Relativity Media and Reel FX Animation Studios have released a trailer for this fall’s Free Birds. It’s an animated film featuring the voices of Owen Wilson and Woody Harrelson.

Free Birds centers on two turkeys called Jake (Harrelson) and Reggie (Wilson). Jake is on a top-secret mission and he needs Reggie’s help to pull it off. They plan to jump in a time machine and travel to the first Thanksgiving. While there, they’ll attempt to keep turkeys from becoming the holiday’s meat of choice. If they succeed, they’ll save countless lives including their own.

Solutions for nightmare Thanksgiving scenarios with his family >>

As you might suspect, the trip doesn’t go according to plan. Jake and Reggie become revolutionaries who must lead their turkey brethren away from the slaughter. They talk a good game but are they up for the challenge? They’ll need more than pure intentions to pull this off. The future of Thanksgiving is in their clawed hands.

Movies to watch over the boring holiday break >>

What do you think of the first trailer for Free Birds?