Paula Deen’s sons, chefs Bobby and Jamie Deen, go on record to defend their mother against recent allegations that she is a racist.

Ever since she admitted last week to using the N-word, things have been on a steady downward slide for chef Paula Deen. First she bailed on a Today Show appearance, then got trashed by Wendy Williams 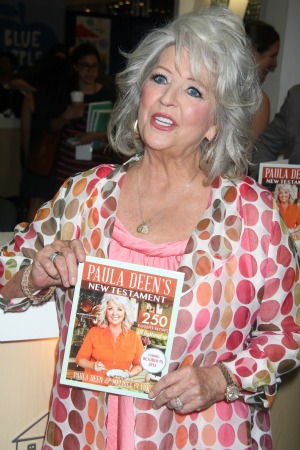 and then was dropped by another sponsor.

Some of Deen’s fans have been fighting back, saying that the Food Network is being too harsh on the butter-loving chef.

Now Deen’s sons, chefs Bobby Deen and Jamie Deen, have joined in the battle to defend their mother. Bobby Deen spoke to CNN on Tuesday, saying that that the allegations are “character assassination.”

“Neither one of our parents ever taught us to be bigoted toward any other person for any reason,” Bobby Deen told CNN. “Our mother is one of the most compassionate, good-hearted, empathetic people that you’d ever meet,” he added. “These accusations are very hurtful to her, and it’s very sad.”

Bobby Deen went on to insist that the depictions of their mother are clearly an effort by the plaintiff to get a chunk of the family fortune. “I’m disgusted by the entire thing, because it began as extortion and it has become character assassination,” he said.

Jamie Deen also added that that it is “ridiculous, completely absurd to think there is an environment of racism in our business, and it’s really disrespectful to the people that we work with. We have strong, educated men and women of character that have been with us for five, 10, 15, 20 years. To think they would allow themselves to be in this position is simply baloney. It’s ridiculous.”

As further proof, Jamie Deen went on to tell a story about when was a child and his parents taught him the story of his hero, baseball legend Hank Aaron. They explained that “the challenges [Aaron] had to overcome because of his color [were] unacceptable.”

Those certainly don’t sound like the words of a racist, but it’s all a matter of who you want to believe at this point.

Do you think Paula Deen is a victim of character assassination as her sons say, or is she getting what she deserves for using racial slurs?