Rihanna is furious over criticism by a British journalism that she’s a terrible role model for young girls. Catfight! 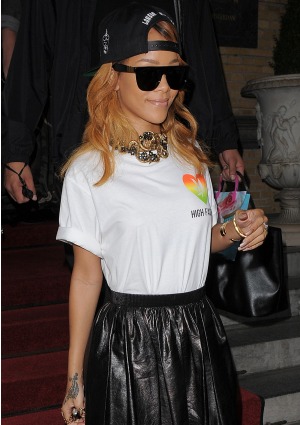 Most celebrities take criticism with a grain of salt — haters abound in Hollywood, you know — but one star just is not having it. Rihanna is striking back after British journalist Liz Jones took her to task for her sex, drugs and rock ‘n’ roll lifestyle.

Jones, a columnist for The Daily Mail, called Rihanna “pop’s poisonous princess” and said, “Glorying in drugs, guns and sleaze, Rihanna’s [a] toxic role model for her army of young fans.”

Did Rihanna’s lipstick give a woman herpes? >>

She also pointed out that the star is all too happy to clean up her act when there’s money involved, like trying to nab “a high-end fashion advertising campaign” or impressing the likes of Anna Wintour to secure the cover of Vogue.

Rather than let the article roll off her back, Rihanna wrote a scathing rebuttal on Twitter and Instagram.

“My money got a bad habit of pissing people off!!” she wrote. “If you sincerely wanna help little girls more than their own parents do, here’s a toxic tip: don’t be amateur with your articles, you sound bitter! What’s all this about hair and nails and costumes and tattoos?? That s*** ain’t clever!!! That s*** ain’t journalism! That’s a sad sloppy menopausal mess!!!”

“Nobody over here acts like they’re perfect! I don’t pretend that I’m like you, I just live… My life!! And I don’t know why y’all still act so surprised by any of it!! ‘Role model’ is not a position or title that I have ever campaigned for, so chill wit dat! I got my own f***ed up s*** to work on, I’ll never portray that as perfect, but for right now it’s ME!! Call it what ya want!!”

“Toxic was cute, Poison Pop Princess had a nice ring to it, just a lil wordy! And P.S. my first American Vogue cover was in 2011… April!!! #ElizabethAnnJones”

Rihanna is currently on the European leg of her Diamonds tour, which has been plagued by the singer’s late appearances, sometimes leaving fans sitting for hours after being spotted partying until the wee hours the nights before — and even left one fan smarting after she whacked ’em in the face with her microphone.