While Savi’s trying to determine the father of her child, April thinks the matter of paternity has been settled in her situation. They both have no idea. 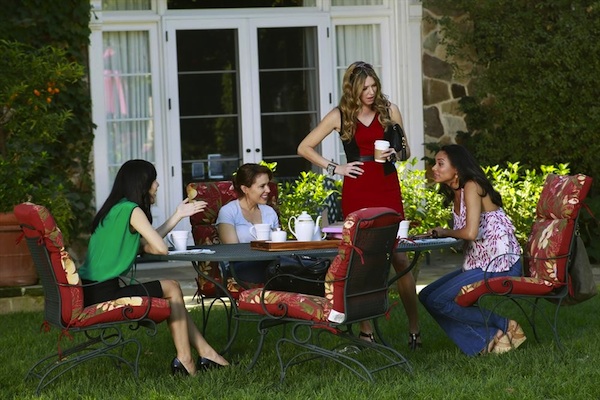 Mistresses is getting more than just racy. Savi’s definitely pregnant, but she has no idea who the father is, which breaches some seriously deep issues she doesn’t know how to handle. That’s OK, neither does the show.

Sam left his wallet in Karen’s car. Karen returns it to him, and he tells her he dropped out of college. Sam says his dad told him to drop out. He shows Karen a camera and admits his passion for photography. He explains that his dad tracked down the camera for Sam just before he died. Tom left a letter as well. In the letter, Tom tells Sam he found his passion late in life (meaning Karen), and that once Sam finds his, he should jump into it and not let it go. The letter makes Karen upset and Sam notices.

Sam makes Karen dinner. She’s uncomfortable but agrees to stay, and the two have an intimate moment where Karen seems to recognize her feelings for Sam. She gets a text about an office emergency and has to leave. Sam kisses Karen before she goes. Karen tells him immediately that he got the wrong impression (he didn’t), and she leaves. Sam gets so angry that he knocks everything off the dining table. 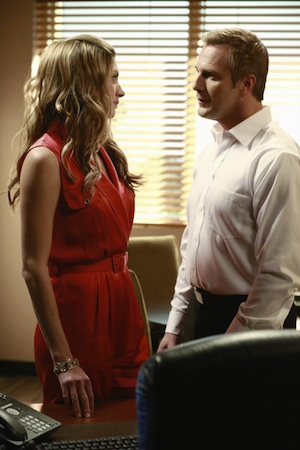 There’s a kinda flirty thing going on with Joss and Harry. We sense trouble, even though things seem to be getting romantic with Alex.

Alex invites Joss to a jewelry design event because Sally flaked on her. Joss kisses Alex to help save her from a girl who is flirting with her, and Alex becomes offended and runs off.

Later that night, Alex arrives at Joss’ house. She and Sally broke up, and Alex is visibly upset. Joss allows Alex to stay the night at her place.

Miranda’s attorney arrives with a paternity test, which proves Paul was the father of her son Scotty. Miranda is planning on suing for child support. Even though Paul is dead, his estate is alive and, therefore, Miranda’s child has claim to part of his money.

April calls Miranda. She realizes she has no choice but to pay this woman, which may mean she will lose her house. Savi encourages April to tell Lucy about her father. Savi offers to take on the case. If she can prove entrapment, then Miranda won’t have a case.

Miranda meets with April and admits that she knew Paul was married. They’d been together for a year before she got pregnant. Paul planned on leaving April for Miranda. They were celebrating the pregnancy on vacation when Paul died.

During the conversation between April and Miranda, Scotty gets hurt. At the hospital, April offers to take the bill. Miranda and April come to understand one another through the incident.

Cut to Miranda talking with her lawyer, I mean actor. Turns out, she hired the guy to pretend to be her attorney, which means she is either faking the whole thing or hiding more than we know. Either way, not good for April, and Miranda isn’t the struggling mom we thought.

Poor Savi (Alyssa Milano) is in a bad place. I’ll go ahead and state the obvious situation the show is following but in a jerky “You get what I’m saying without me completing the sentence,” kind of way. She can’t just have the baby and pretend it’s Harry’s because if it’s Dominic’s baby, it will be half black. There is no way Harry won’t know. But if it’s Harry’s baby, then this could be their one shot at getting pregnant so she can’t just abort the pregnancy. Plus, she’s wanted a baby for so long, but then decided after the affair that she thought they should wait. No word on whether or not she’s excited about the baby. She just kind of has this shocked look in her eyes the whole episode. We get it. We just hope next week will bring some clarity.

Savi goes to the doctor regarding paternity. The doctor tells her about a new procedure that will allow her to know the paternity within the first trimester. All she will need is a sample of DNA from both potential fathers. (No word on what she intends to do if the baby is Dominic’s.) The appointment runs behind schedule, though, and Savi calls Dominic asking him to be at the courthouse in her place for the first day of the trial. Dominic agrees to help.

Savi’s boss Ron is upset with her for missing the trial and gives the case to Dominic.

What did you think of Savi’s pregnancy troubles?