Shailene Woodley headlines the big screen adaptation of Divergent, which puts her in great company. Is she poised to be the next Jennifer Lawrence? 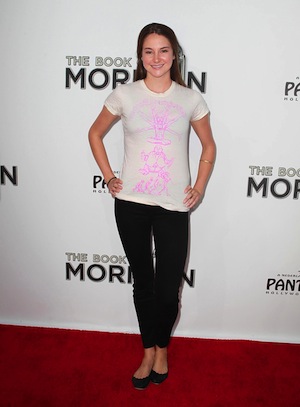 The tide is changing for movie heroines. Thanks to Black Widow from The Avengers and Katniss Everdeen in The Hunger Games, films like Divergent are being made. Based on the popular novel of the same name, the movie stars Shailene Woodley as an unlikely hero.

Woodley plays Beatrice ‘Tris’ Prior and lives in the futuristic dystopia that used to be Chicago. Her world is divided into factions, and once she turns 16, she chooses to leave her home. This starts a domino effect that forces Tris to endure several brutal and psychological obstacles.

The character is pushed to her limit and proves to be stronger than she thinks. “What I like about Tris is that she’s isn’t perfect. She’s not a superhero — she’s not Katniss,” Woodley tells Entertainment Weekly. “She doesn’t know how to shoot a bow and arrow, she’s not a bada** by nature.”

When Woodley was initially brought the role, she was hesitant take it. She knew the amount of fame that could come her way if Divergent became the next Hunger Games or Twilight. “My agents were like, ‘Are you f—ing crazy?’ But I said if this movie is successful, things will change and I don’t want that.”

Shailene Woodley’s hot new movie: The Fault in Our Stars >>

Even if she didn’t take the role, Woodley’s future would still be bright. After wrapping her run on The Secret Life of the American Teenager, she landed the lead in The Fault in Our Stars as well as a spot in The Amazing Spider-Man franchise.

Divergent is directed by Neil Burger and opens in theaters on March 21, 2014.