The Eli Young Band is following up their smash hits “Crazy Girl” and “Even If It Breaks Your Heart” with the introspective and apologetic love song “Drunk Last Night.” 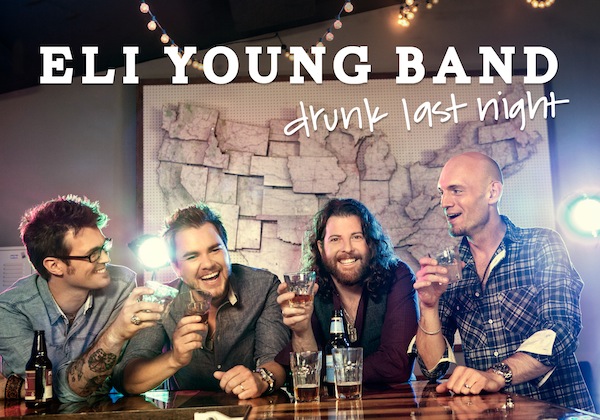 For all of you who don’t know this, there is no Eli Young. Well, maybe there is one somewhere, but he doesn’t have a band.

The Eli Young Band is made up of four fraternity brothers who met at the University of North Texas: Mike Eli, James Young, Jon Jones and Chris Thompson.

Check out The Civil Wars’ latest: “The One That Got Away” >>

While they got together in 2002, more recently the guys have been tearing up the charts with their hits “Even If It Breaks Your Heart” and the 2012 ACM Awards Song of the Year “Crazy Girl.”

And now the guys are releasing a new single titled “Drunk Last Night.” But this isn’t the crazy, up-all-night party song the title would have you believe.

Guitarist James Young explained in an interview with blog Valley 24 that the song is “more introspective than what the title would allow. When this song came along, it was like, ‘Oh my goodness! We have to cut this and put it out as the first single.’”

The introspective, mid-tempo song is about a love most likely lost but that is torturing the poor guy and not letting him sleep thanks to booze. Instead of drinking to forget, the drinking made him remember what he’d lost.

Oh, Mike. We’ve all been there — or been on the receiving end of those boozy, apologetic phone calls.

Young also hinted that “Drunk Last Night” isn’t the only new music they have coming out.

“We’ve been working on new music,” Young said. “We recorded eight songs. So it’s time to get new music out there.”

Hopefully, this means a new album from the band is in our future.