Just a week after their daughter North West was born, rumors are flying that Kim Kardashian and Kanye West got engaged. But are they true?

Kim Kardashian has made the news quite a bit in the past 10 days or so. First she gave birth to her 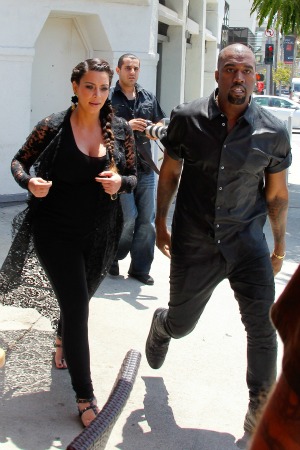 daughter reportedly 5 weeks early (though we’re not so sure about the validity of her due date). Then she kept us all waiting for a name until finally announcing that her daughter’s name was North West. And if you’re still suffering from confusion caused by that name, here’s a little something that might help.

Is Kim Kardashian punking us with North West baby name? >>

The latest buzz around the new mom is that her baby daddy, Kanye West, supposedly proposed over the weekend. The Sun reports that West asked Kardashian to marry him just one week after she gave birth to their first child.

A source said that West “wasted no money in making sure Kim had the best of everything while she’s in hospital. He has spent half a million on a ring as a push present and had it designed months ago in preparation. He’s even more in love with her now than ever and they can’t wait to get married.”

Is it just us or does it sound like somebody took an innocent quote about Kanye not being able to wait until he marries Kim and blowing it up into an actual proposal? It looks like that might be the case, too. Another source told People magazine that, despite the rumored proposal over the weekend, West has yet to pop the question, though it is apparently “on the agenda.”

So we all might just need to cool our jets for the moment. It looks like the new parents are planning to have a wedding someday, but not quite yet. At the moment, we’re sure their hands are plenty full with a brand new baby to take care of.

Do you think Kanye and Kim are engaged? Or do you think someone jumped the gun with the announcement?