Enough is enough. Mayim Bialik is exhausted over the nonstop “fight” over her decision to breast-feed and co-sleep with her toddlers. 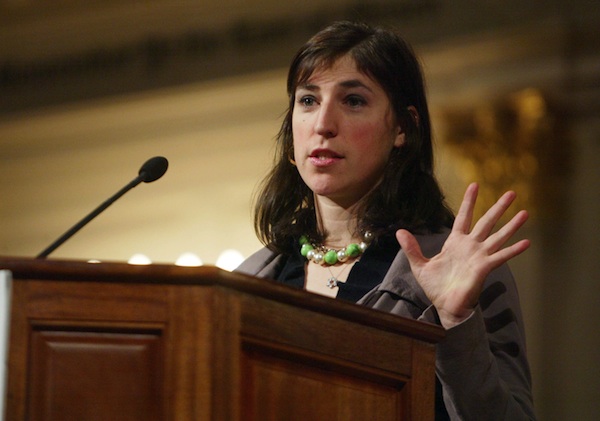 Mayim Bialik doesn’t care what you think about her controversial “attachment style” parenting choice or that she breast-fed her toddlers. Just please, don’t fight with her about it — Bialik is exhausted from the criticism.

For some quick background info: Mayim Bialik is the 37-year-old star of The Big Bang Theory on CBS, a role that revived her television career from her child acting days from the 1990s sitcom Blossom.

Bialik made headlines last year when she confessed on a blog post for the Jewish parenting site Kveller that she still breast-fed her 3-year-old. (Most moms say they typically wean their children off breast milk somewhere around the nine- to 12-month mark).

Getting personal: Celebrity moms who breast-feed in public >>

While Bialik received lots of positive attention surrounding her choice she also faced the brunt of a huge backlash in which, for the most part, people found her decision “disgusting.”

Bialik spoke to omg! on Friday night and said the strict attention to her parenting choices brought on by her unusual breast-feeding decision are sometimes overwhelming and mostly annoying.

“If I’m talking to girlfriends, if I’m talking to random people, and we’re talking about parenting, I tell them what works for me and why. But a lot of people want to ask me things so that they can fight me,” Bialik said. “And just because I’m a public person, who happened to have breast-fed and [co-slept] with her kids, that doesn’t mean I want to fight with you on the street or in the supermarket.”

The most powerful working moms >>

The mother of two boys said her Ph.D. in neuroscience plays a big role in her parenting decisions. “The development of their brains and their psyche and their place in the world is very complicated and nothing is unimportant to them, so I think both their dad and I sort of always govern by that, you know. Everything matters about every interaction, being very clear, keeping communication lines open,” she said.

Bialik is not alone in her decision to breast-feed past the conventional age, but the medical community is divided over the benefits of the practice and attachment-style parenting in general.