Tonight’s premiere of Under the Dome, where residents of a town become trapped under an impenetrable dome, joins the company of recent programming and premieres that are provocative, thought-provoking, and an interesting break from reality TV. But how far is too far? 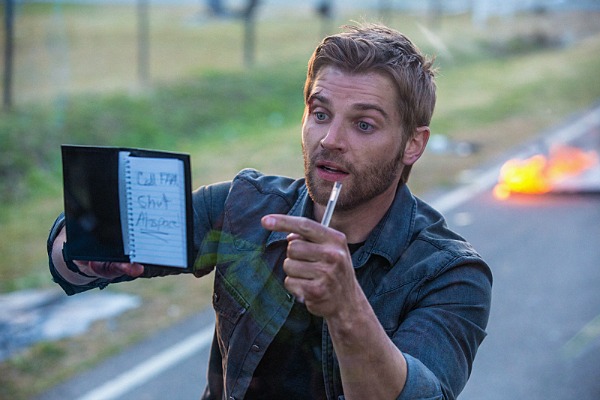 Under the Dome, brought to us by the “Master of Macabre” Stephen King and the Master of Movies Steven Spielberg, takes us, well, under a dome. Residents of could-be-anywhere Chester’s Mill realize they are being held captive by a transparent dome when birds start falling from the sky and cars crash into the transparent barrier. Imagine if you woke up tomorrow and you were cut off from food supplies, your long-distance relatives and contact with the outside world? Fah-reeky. Tune into CBS tonight at 10/9c to see how the people of Chester’s Mill deal with this terrifying situation.

Under the Dome character previews >>

Merriam-Webster defines daredevil as “recklessly bold.” Was I the only one who didn’t have the stomach to watch aerialist and daredevil Nik Wallenda walk a tightrope across the Grand Canyon Sunday night on the Discovery Channel (sans safety equipment)? Nik prayed the length of his 22-minute trip, and the good Lord (perhaps while questioning Nik’s sanity and intelligence) was listening. This stunt left me with two thoughts. If I were Nik’s wife, I’d kill him and he wouldn’t have to worry about falling from a tightrope, and what next? You know there is someone out there who took Nik’s death-defying stunt as a challenge. As I write this, some “daredevil” is plotting about how they can outsmart gravity and one-up the Grand Canyon guy.

What is it about the nastiness of the rich that we all find so compelling? We all read and watched The Nanny Diaries with rapt fascination. We all read and watched The Help with curiosity and disgust. Tonight’s premiere of Devious Maids will feed our desire to see how the other half lives and behaves. Produced by Eva Longoria, Devious Maids tells the stories of five Latina housemaids and their impossible bosses. The show is already drawing criticism for portraying Latinas in demeaning and stereotypical roles (to which Longoria responded in an online video with, “So you’re telling me these stories aren’t worth telling?”). Devious Maids scratches that fly-on-the-wall itch that so many of us have, and the title suggests that the maids get even. Devious Maids premiered Sunday night on Lifetime, but if you missed it you can catch the encore performance tonight.

Pretty Wicked Moms on Lifetime should be called “Mean Girls Had Kids.” This train wreck derails on motherhood and gives us a glimpse into what happens when Mean Girls grow up and have babies. The “leader” has a mini-me and the maternal instincts of a pit viper. There’s the ugly duckling who will stop at nothing to be one of the cool kids and no b****-fest would be complete without arch rivalries. This show is intriguing in a “are people really like that” kind of way, but the whole time you watch it, you feel compelled to reach for the Department of Family Services’ phone number. Watch these supremely superficial women on Lifetime, Tuesday nights at 10/9c.