Now that Sookie’s kicked Eric to the curb on True Blood, it’s time for her to be an independent, new woman. With another sexy man in her life, of course. 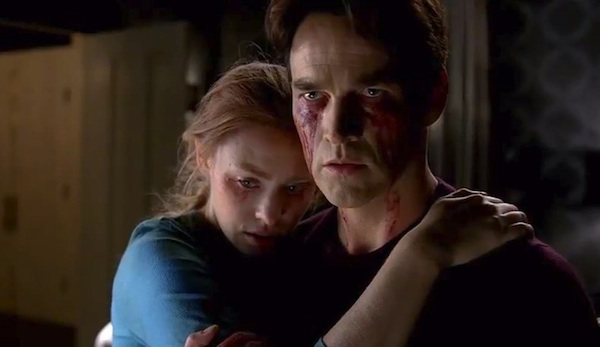 This week on True Blood, the war between vampires, all other supernaturals by default, and humans has officially started. From the looks of this episode, Bill (Stephen Moyer) will be the secret weapon for the vampires, but the humans definitely have their own tricks.

Warlow breaks through to Sookie’s world. He comes in the form of a creepy hooded man with a trench coat and fangs.

The new guns from the police have Tara near death. Their silver bullets emit UV light. Luckily, Eric (Alexander Skarsgard) shows up in time to pull it out before she dies. The humans are fighting back. Eric plans on giving the humans their war. He tells Nora to continue scouring the human bible for clues about Bill while Eric deals with the humans.

Speaking of Bill, he didn’t pick the best wingman for his Lilith-induced takeover. Jessica has no idea what to do to help Bill and, therefore, just spends most of this episode afraid and crying.

Bill is having visions of vampires being attacked. Then Lilith takes him to a grass field called No Place where she tells him events have been set in motion. She is no god, though some worship her like one as they may come to worship Bill. He will save them all by trusting what he sees.

Jessica hires a blood prostitute who charges for her bites. Apparently Bill’s hungry, but he doesn’t want to pay. He creepily contorts her body and then draws the blood from her like a straw without ever touching her.

Jessica asks Bill if he is God and begins to pray before him. He snaps out of his coma dream with a realization that he can see the future.

Sookie’s got a new boy toy 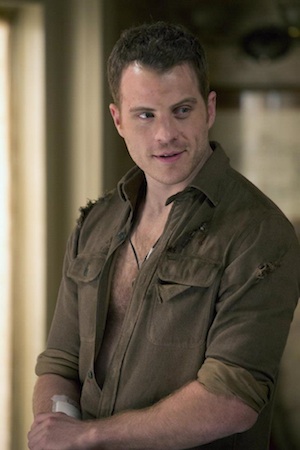 So, last week, Sookie (Anna Paquin) broke up with Eric because she wants a normal life, but she flirts with the first supernatural boy she meets. His name is Ben and, like Sookie, he can hear people’s thoughts. He’s half faerie, which means they can speak to each other by reading each other’s minds. No words necessary. Talk about instant chemistry. Cue the new love interest.

Still, he’s a strange man. No matter, Sookie takes him home to tend to his vampire bite wound. Ben says he’s in Bon Temps looking for a place to put some roots down. Sookie, after already taking him home, then decides she shouldn’t be talking to strange men. It never ends well. (A little too late.) She directs him to the Faerie Club and leaves.

A girl shows up at Merlotte’s and knows Sam is a shifter. She encourages him to go public about his supernatural ability. Her name is Nicole, and she is head of the U.S. Vampire Unity Society. Sam blows her off.

Sookie’s got a secret weapon, too

Jason shows his faerie grandfather his house, and the portal where Warlow tried to break in. Grandpa jumps in the portal, which he says leads to a terrible place. When he returns, he’s soaking wet.

Sookie returns home, and Jason introduces her to grandpa. Grandpa reveals Warlow got to their world sometime within the past 24 hours. The faerie grandfather is king of the tribe, which makes Sookie a princess and Jason nothing — the gene skipped him.

Grandpa explains Sookie can channel a ball of light that, when released, will kill any member it touches (hopefully Warlow). Once Sookie uses this power, she will lose her faerie abilities.

Eric pretends to be a man with the Department of Wildlife and Fisheries who has a meeting with the governor. Once Eric is inside the governor’s office, he reveals himself as a vampire and tries to glamour the governor. It doesn’t work. The governor tells his soldiers to bring Eric to camp, whatever that means.

Other things to mention