Channing Tat-YUM is on a mission to save his daughter, the White House and the world in this action-packed thriller. Our only complaint? He doesn’t strip down to his tank top until about an hour into the film! But once he does, it’s magnificent muscle madness as he takes down the bad guys, making this “president in peril” movie much better than the one from last March. 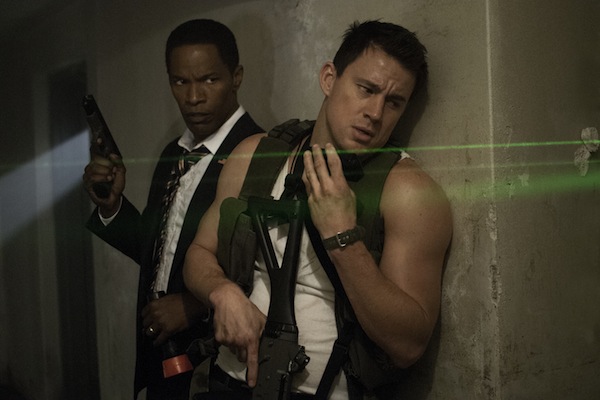 After three tours in Afghanistan, John Cale (Channing Tatum) is a Capitol policeman with a dream to work security for the President of the United States, John Sawyer (Jamie Foxx). Pulling favors, he lands an interview with security boss and old college flame, Carol Finnerty (Maggie Gyllenhaal), who doubts his commitment, given that he dropped out of school.

After his less than successful interview, Cale tries to impress his 11-year-old daughter Emily (Joey King), with a tour of the house at 1600 Pennsylvania Ave. Emily is currently displeased with her dad because he failed to attend her recent talent show, where she showed off her flag-twirling skills — a talent that will come in handy later, believe it or not. But sassy little Emily has a crush on President Sawyer and lightens up after a brief meet-up with the Obama doppelgänger.

Battle of the flicks:White House Down VS. The Heat >> 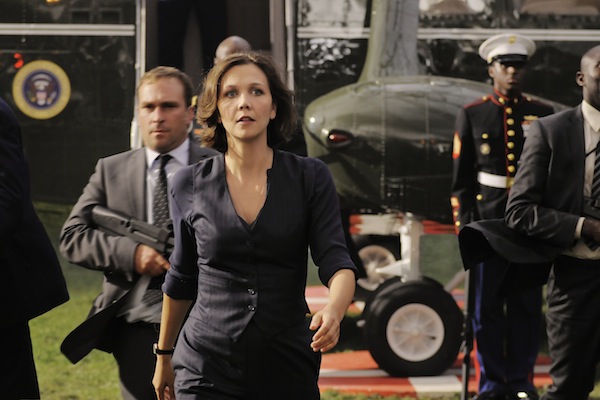 Meanwhile, electricians are adding surround-sound to the White House movie theater, at the request of First Lady Alison Sawyer (Garcelle Beauvais), so no one notices as rocket launchers are smuggled past security by Emil Stenz (Jason Clarke) and his covert paramilitary gang who are disguised as electricians.

Channing Tatum makes a stellar action hero, always sincere without ever taking himself too seriously. Doing most of his own stunts, it’s a delight to watch him fight off the massively-armed gang of bad guys and sneak through the underground tunnels that may or may not have been used to transport Marilyn Monroe to President Kennedy. 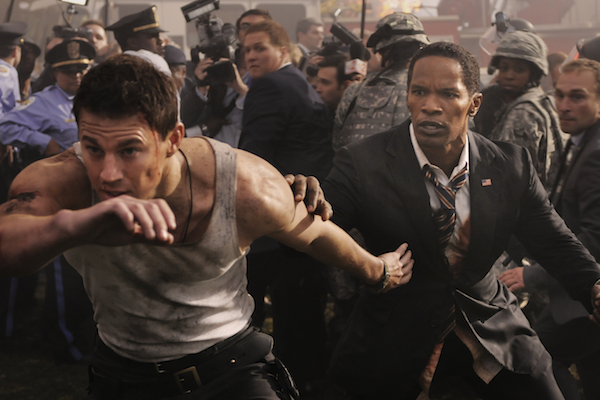 The White House itself (actually a set built in Montreal) becomes its own character, with back story and a strong will to survive. At one point, Cale and the President are engaged in a car chase on the front lawn, doing loops around the main fountain.

Joey King makes an impressive debut as Emily, boldly staring down her captors and committing an act of bravery that would impress Dolley Madison herself. Jimmi Simpson as black-hat hacker Tyler brings a joie-de-vivre to his deadly computer antics with his love for lollypops and classical music.

Bottom line: The story is held together by a lot of nifty coincidences, but White House Down is great summer fun, especially when the action takes cues from the War of 1812. Enjoy!