Paula Deen fans are melting down faster than butter on the Food Network’s Facebook page. 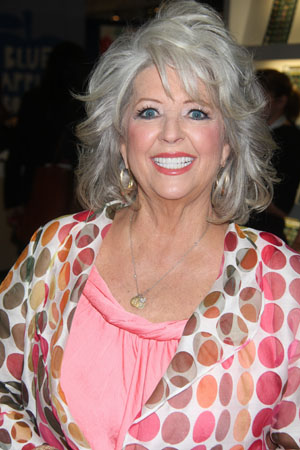 Paula Deen didn’t have a very good Friday. First, she pulled out of a planned Today Show appearance after admitting that she did, in fact, use racial slurs against her black employees. The butter-loving chef tried to explain her behavior away in two stumbling apology videos, but the damage was already done — and Food Network dropped her shows from its lineup.

“Food Network will not renew Paula Deen’s contract when it expires at the end of this month,” a spokesman said.

This set fans off. The network’s Facebook page is now filled with indignant fans expressing their disgust over her firing. Most say they’re “so done” with the network because, after all, who hasn’t said a racial slur? It’s just natural.

We’re being sarcastic, but many fans actually believe that. Here’s just a (very) small sampling of her fans’ Facebook freakout:

“Everybody is so squeaky clean that they never used a slur in privet [sic] their whole life? Really? Bye bye Food Network.”

“Just wondering….How many people who work for the Food Network have NEVER used a racial slur in their ENTIRE lives? People who live in glass houses should not throw stones.”

“I’m very disappointed in you, “Food Network”!!! Paula Dean has been punished for something millions of Americans admit to. How unfair to sit behind that big desk and judge. How many more are at risk?? Shame on you!!!!!!!”

“Shame on you Food Network for Firing Paula Dean……That’s the pot calling the kettle black…..Who hasn’t made a racial comment in their lives about others….you have made a fortune from her shows why don’t you stand behind her instead of distancing yourself from her….I won’t watch Food Network anymore She was great and great fun!!!!!! You lost a loyal fan !!!!”

Another common theme is that the network is being too “politically correct.”

“good bye food network. unless YOU apologize to Paula Deen AND America. enough is enough of the politically correct bullcrap!”

Others think it’s a matter of free speech.

“is it really freedom of speech if we could lose our jobs and more? Innocence until proven guilty. I don’t believe a person has to justify every aquisation (sic) about them. Let the public decide?”

Do you think Food Network was right to fire Paula Deen? Sound off below!