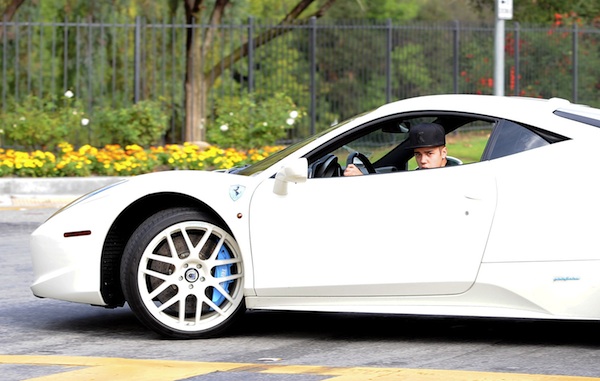 Video footage — shot by an annoyed and concerned female resident — shows Justin Bieber’s Ferrari 458 speeding past her on a on a quiet, curved road in Calabasas. Just as the driver of the Ferrari screeches around the corner, the resident catches Justin Bieber’s flat black Range Rover swerve around her. We should mention it appears both the drivers of Ferrari and the Range Rover committed at least two traffic violations: speeding and passing on a double yellow.

Despite the dangerous speed of Bieber’s vehicles, all three drivers meet at the entrance of a gated subdivision (The Oaks) and things quickly turn ugly. With Lil Twist in Bieber’s Ferrari 458 lined up at the gates first, followed by Lil Za in the Range Rover, Lil Za leans super-far out his driver’s side window and starts giving the resident filming serious attitude.

Photog gets trapped between Bieber’s Ferrari and another car >>

Lil Za first complains about the filming, even though the resident explains why she’s taping the dynamic duo. Then, Za demands she back up her car so he can put his car in reverse to reactivate the gate sensors.

When she politely refuses and says neither of the teenagers are residents of the community, Lil Za climbs out the Range Rover and is seriously disrespectful. He alternates between demanding she stop filming, talking to Lil Twist her as if she’s not there and blaming her for driving too slow.

Security officers confront Lil Za who exclaims, “She’s not letting us in! What the f*ck is this? What type of sh*t is this? She got to move so we can get in.”

Then, as Lil Twist and Lil Za move their cars so the resident can enter the community, Lil Za can be hear yelling “F*ck you!” as he takes off from The Oaks.

You can watch the entire video below — courtesy of TMZ — that shows Lil Twist and Lil Za causing lots of trouble in Calabasas.