Just when you thought that the guys from Hot Chelle Rae couldn’t have any more fun, they are taking a break from the studio, packing their bags and hitting the road as a support act on Justin Bieber’s “Believe” tour. 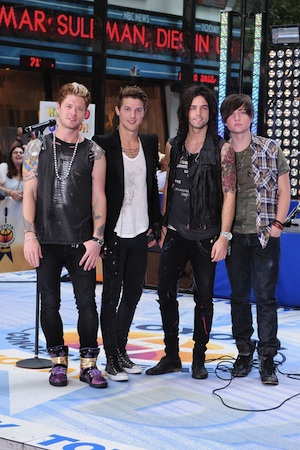 After the huge success of their 2011 smash “Tonight Tonight,” you’d think that the guys from Hot Chelle Rae would take it easy.

You know, days by the pool in Los Angeles and nights dancing on top of the Hollywood sign.

But the guys from Nashville have been working hard to make sure we have more fun and poppy dance songs.

How did Hot Chelle Rae get their name? >>

Currently, Ian, Nash and brothers Ryan and Jamie are in the studio recording the follow-up to 2011’s Whatever which not only featured “Tonight Tonight,” but also “I Like It Like That.”

And now, after touring with stars like Demi Lovato and Taylor Swift, the boys will be hitting the road with none other than Justin Bieber.

Fans of Hot Chelle Rae will not only get to hear their favorites, but also some new songs from the untitled upcoming album.

The guys will tour with Bieber throughout July and are currently scheduled to get back to recording at the beginning of August.

We have the tour dates for you below. In the meantime, take a listen to their newest single “Hung Up.”