It’s hard to believe that Johnny Depp is 50 years old. He looks great and hasn’t missed a beat. Unlike most of us, the actor doesn’t fear aging. 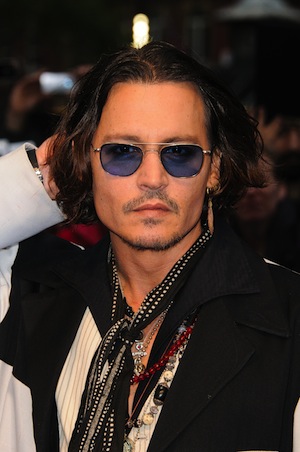 Most people fret about turning 30, and are terrified of the big 5-0. But actor Johnny Depp isn’t most people. Earlier this month, he passed the milestone without a care in the world. What’s his secret? How can he stay calm at a time like this?

Happy b-day, Johnny Depp! A look at his accessories over the years >>

Depp recently shared his positive outlook with E! Online. He said, “I think any day you wake up and you’re still around is a good thing. Every time you could take a breath and exhale and inhale again, it’s a good thing.” He continued, “50 is, like, ‘Sure! Why not?'”

Can we have a glass of what he’s drinking? To be fair, Depp is in pretty great shape. There’s some truth to that classic line, “You’re only as old as you feel.” The actor hasn’t slowed down, which is evident in his latest film, The Lone Ranger. Depp spends most of his screen time topless and riding a horse.

He stars opposite 26-year-old Armie Hammer, who’s practically half his age. Depp even does some of his own stunts, one of which almost cost him his life. The actor had a run-in with a horse that nearly trampled him. “It was a weird one,” he said. “Amazingly, I got up and walked away from it with just a few scratches.”

Depp is currently shooting the sci-fi thriller Transcendence, which will be followed by the musical Into the Woods and Pirates of the Caribbean 5. Yes, they’re making a fifth movie in that franchise. Apparently, the world can’t get enough of Jack Sparrow.

Not to mention, Depp has 19 projects in development. Perhaps his love of acting is his anti-aging secret?