Paula Deen’s controversial week ended on a down note after she cancels her Today Show appearance at the last minute. 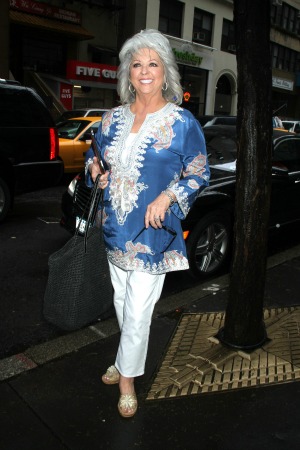 The old saying goes, “If you can’t take the heat, get out of the kitchen.” That’s exactly what Paula Deen has done. On Friday, The Food Network star bailed on her scheduled Today Show appearance at the last minute.

It’s been a tough week for the Southern food personality after her deposition was released from a $1.2 million lawsuit filed against her by a former employee. In the transcripts, Deen admitted to using the N-word on many occasions.

The backlash against the 66-year-old was so fierce that she issued a public statement to clarify the deposition statements.

Deen’s rep stated, “During a deposition where she swore to tell the truth, Ms. Deen recounted having used a racial epithet in the past, speaking largely about a time in American history which was quite different than today. She was born 60 years ago, when America’s South had schools that were segregated, different bathrooms, different restaurants and Americans rode in different parts of the bus. This is not today.”

Those words certainly don’t sit well with many critics since it sounds like she is using her age and Southern roots as an excuse rather than take responsibility for her actions.

The criticism appears to be too much for Deen who was supposed to address the controversy in a sit-down interview with anchor Matt Lauer. The morning show host seemed baffled by her absence.

He tweeted, “Hoping to get more info on the Paula Deen situation soon. Very confusing.”

Lauer did announce on the air that Deen pulled out of her scheduled appearance.

The Food Network has yet to make a statement on their embattled cooking star, but the heat might just push Deen right out of that television kitchen.