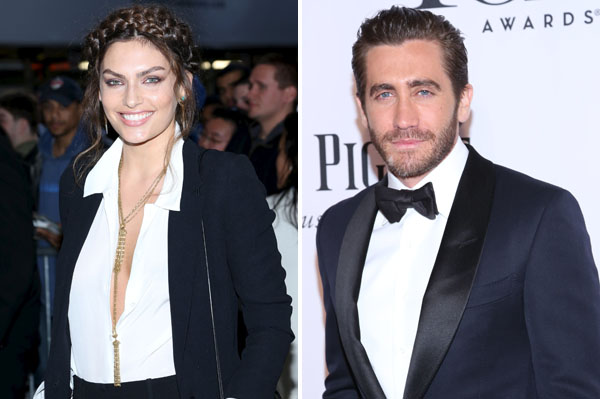 Hear that noise? That’s the sound of a million hearts breaking after hearing that Jake Gyllenhaal might have a new girl on his arm. People magazine reports that the 32-year-old Brokeback Mountain star has been spotted around New York City with Sports Illustrated model Alyssa Miller.

The pair was spotted together last Sunday at the Cold Process Coffee and Tea pop-up stand at Manhattan’s Pier 57 — and they looked pretty cozy, from the sound of it.

“You could tell they were a couple. There was lots of PDA going on,” the spy told the magazine of the date. “They didn’t make out, but they would kiss each other on the lips multiple times. More like little pecks and they were very touchy-feely. They couldn’t keep their hands off of each other.”

“There was lots of laughing,” the source continued. “Jake and the girl were totally comfortable with each other. Jake had a huge smile the whole time.”

But is it serious? It seems like the bearded actor, who has dated Taylor Swift, Reese Witherspoon and Kirsten Dunst, is making the rounds of the SI model roster. In March, he was spotted at a SoulCycle class with model Emily DiDonato.

It’s kind of his M.O., though — at least according to Swift. The singer reportedly wrote her song “We Are Never Ever Getting Back Together” about her 2010 relationship with Gyllenhaal.

“I think once a relationship is done it’s done, you can’t do that back and forth thing — it’s the most exhausting process,” Swift told a Spanish talk show about the actor, according to HollywoodLife. “I think you have to have somebody that’s dependable, that isn’t going to change their mind every five seconds.”

Our advice for Miller? Beware of the serial dater!