With a slew of characters, all hiding their secrets, it’s no wonder Under the Dome is already being compared to Lost. 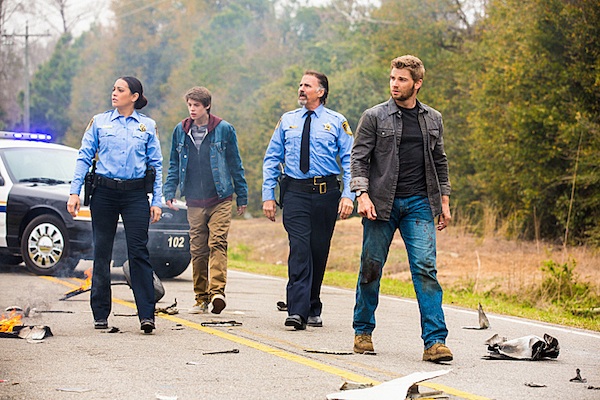 Just in time for summer, Under the Dome is bringing action and mystery to the small screen. Don’t make the mistake of thinking the show is just action-packed fluff, though. In fact, expect the opposite. Based on the Stephen King novel of the same name, the show is slated to be a character-driven parable for our times that we think is going to be a blast to watch.

Here are the top seven characters to look out for when the show premieres on June 24:

The hero of our story. Or is he? When the show starts, Barbie (Mike Vogel) is burying a body. There’s more to this Army veteran than meets the eye. He is first presented as a drifter, but when the dome falls on the town, he’s the one to step up to the plate. Barbie, with the help of Julia, will begin the investigation to see if the dome is actually an inside job. But why was Barbie even in the town in the first place? And who was he burying?

He may look innocent, but Junior (Alexander Koch) has a violent streak. When he’s rejected by Angie, Junior’s true colors come out. Not only does he have a bad past with Angie, he and Barbie don’t get along either. In the books, Junior’s father Big Jim is blind to his son’s extreme bullying. Big Jim appoints Junior to serve on the police force given that most of the force was outside the town when the dome fell. It looks like the TV show will be following a similar story.

She is the editor of the local newspaper in Chester’s Mill. New to the town from Chicago, she’s considered an outsider. Not to mention, she’s quick-thinking and likes to get the scoop, which a lot of the town doesn’t appreciate. Not only does the dome trap Julia (Rachelle Lefevre) in the town, her husband also goes missing. She and Barbie find common ground and team up to discover who’s behind the force field.

He is the big fish in a small pond. When the dome falls, Big Jim (Dean Norris) feels the pressure to rise to the occasion, but is he the man for the job? Not really. He’s too afraid of losing his power and too stuck in his ways to listen to anyone’s advice. Plus, he may know more about this dome than he’s letting on.

In the books, Angie (Britt Robertson) doesn’t last more than a few pages, but Neal Baer assured us she’s in the series. (He didn’t say for how long.) She has a past with Junior that doesn’t bode well for her future. She wanted to get out of Chester’s Mill well before the dome appeared, and she may end up even more trapped than the rest. We’re told that Angie goes missing and, from the looks of the preview, Junior locks her inside a room.

A farm kid that’s too smart to be cleaning up cow poop, Joe is more interested in the dome. He has a strange connection to it, which could lead to answers and will most likely get him into some trouble. With his sister Angie missing and his parents on the other side of the dome, Joe will have to take care of himself in the trapped town. Luckily, signs look good that Barbie will take Joe under his wing.

She is a small-town police officer with a good life. Until the dome drops, and her fiancé is stuck on the other side. As she struggles emotionally to deal with being separated from the man she loves, Linda has a duty to perform to the town. As an officer, she’s expected to keep her head while everyone else begins to panic. Will she meet the challenge or crumble?