After telling everyone that he’d have a new album out “sometime after Memorial Day,” Eminem is back on the mic — all 90 seconds of him. 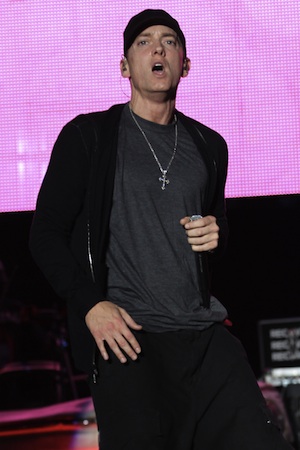 The year 2010 brought us Eminem’s album Recovery, and we haven’t heard nor seen an album from him since.

But now that he’s 40, I am sure that he is taking that idea of recovery to heart.

He is probably on vacation. Lying on a beach, relaxing with a margarita and listening to classical music.

Which is most likely why his new track is called “Symphony in H.” This is an older, kinder Eminem.

Check out these love quotes from rap songs >>

The “H” in “Symphony in H” stands for “hate” and said hate is pretty much directed at all the women in the world.

Em raps, “You remind me of cocaine / You always in the mirror with your face / So I feel an urge to put you all in a line and chop you with a razor blade.”

At least he knows he’s not a nice guy.

“I got an Oscar but I’m still a grouch.”

It’s nice to know that Eminem hasn’t become soft in his old age.

Along with our good friend Em, the album features Busta Rhymes, Xzibit, Ghostface, RZA, and tons of other hip-hop and rap artists.

Eminem’s eighth studio album should be out sometime this year.

Now, because this is Eminem, we probably don’t have to say this, but the clip below is not safe for work.

What do you think of Eminem’s return? Let us know in the comments below.