The Red Wedding brought tears to a grown man-“boy.” 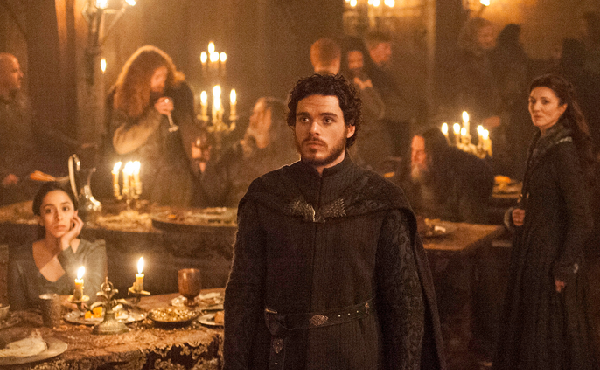 During a recent conference call, Richard Madden opened up about filming the Red Wedding for Game of Thrones. The bloody, climatic episode of the third season of the HBO hit series was an emotional one for many cast members. The Red Wedding didn’t just mark the beginning of the end of the third season; it was also the end of Madden’s run on the show.

Miss the GoT finale? We recapped it! >>

During the Red Wedding massacre, Madden’s character, Robb Stark, was slain. Madden started his time with the Game of Thrones crew when he was just 21. Now almost 27, he’s had time to bond with his cast members… as well as his character. He was so used to “being” the eldest Stark that he admitted to Access Hollywood last year that he sometimes woke up “kind of thinking thoughts, but… in Robb Stark’s accent.” Talk about staying in character.

So, it’s no wonder then that Robb’s murder and Madden’s farewell hit the actor hard. So hard, in fact, he even cried. At least that’s what he told reporters during the post-filming chat. Access Hollywood says the actor admitted to crying all the way home.

“I was the crazy boy on the plane crying at about midnight, landing in London.”

Stream the Game of Thrones soundtrack >>

Aw! Poor Madden! While it seems unlikely, there’s always room for a little hope. (In case you’ve been living under a rock:) The Game of Thrones television series is based on the book series “A Song of Ice and Fire.” The creator and writer of the series, George R.R. Martin, has a thing for killing off his main characters (obviously). However, fans who have read the series know that he will occasionally bring back the dead. While that’s yet to happen in the series so far, Martin has yet to finish the book series either. There’s a chance Robb (perhaps while wearing Grey Wind’s head) could reappear before the end of the series.

We’ll keep our fingers crossed… and we’re sure Richard Madden will, too!