This singer/songwriter from Seattle, Wash., may not have that Macklemore & Ryan Lewis sound (who also happens to hail from the Pacific Northwest), but she’s social media savvy, she’s been compared to Sara Bareilles, and she’s released not one, but two albums — the second of which released this month. Why do we love her? She’s an up-and-coming musician with a unique sound — and we can’t get enough of it. Meet Rachel Wong. 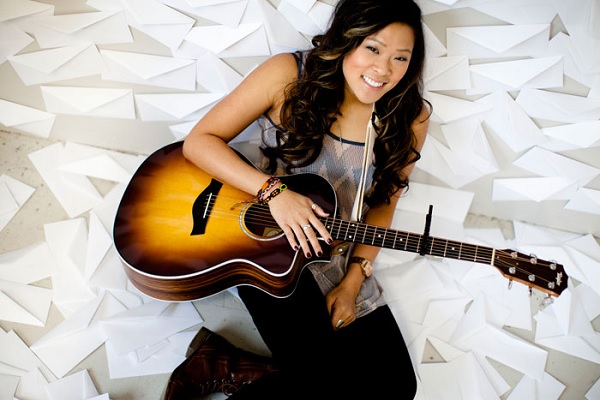 SheKnows: You’re from Seattle, which is known to have such a rich and eclectic music scene. How has living in this city influenced your sound?

Rachel Wong: Most of my influence comes from the artists I listen to. Most of my music is pop. I pull my inspiration from Michael Jackson, Whitney Houston, Alicia Keys. You can truly feel these artists. I love Seattle, but there’s not a whole lot of pop music here. It’s a lot of indie folk or underground hip-hop, which is great, but there’s Macklemore, Blue Scholars…

SheKnows: Can you talk about your new album “Letters to You” and what people can expect from it?

RW: There are some tracks that are really stripped down and more acoustic, and then there’s some that are more OneRepublic and more produced. I’d say that was influenced by a lot of the hip-hop I was listening to. Funny, huh? Hip-hop influenced pop.

I think when I wrote the first album, a lot of the songs were when I was getting out of high school, and it started out as my friend wanted to try dabbling in producing. He was a jazz musician and he’s like, “Yeah, it’s just going to be you.” I played most of my shows just me.

During the early part of writing songs, I was really obsessed with — like many people — Adele. She’s a singer/songwriter and when she performs at award shows or the Grammys, it’s usually just her and her guitar. But when she had records, there’s purposeful string arrangements. A lot of the songs I wrote for this record are deeper stories, and I wanted to add to that in addition to the melody and lyrics.

SK: Does this new album showcase a story from start to finish?

RW: It’s called “Letters to You,” but there’s no track on the album that’s titled that. I called it that cause every song has a story that’s being told. It’s more of a compilation of life stories that people can relate to. Whether it’s a love story or I have a song that’s called “Invisible Strength” that I wrote about one of my really good friends who has always overcome adversity. I performed it at a competition that I was a part of a year ago, and I was just saying my friends were born into unfortunate circumstances but they’re always really positive about life — and it’s inspiring. The judges thought it was about people in the military. It’s great how people interpret that message and apply it to their situations like that; it makes me really happy. Whether or not this album flops, I wanted to come up a collection of stories that people could really relate to and help to inspire them.

SK: In “Letters to You,” are all of the songs based on personal experience?

RW: No, they’re not. It’s funny that people say that. A lot of the love songs that I write about are about my friends or a movie that I see. It’s about every interaction or communication that I have with people, or an observation that I think might be a cool song I could write about.

I’m 25, and a lot of my friends are getting engaged or married. A lot of my girlfriends had boyfriends that they were with for a while and were waiting for them to propose. So, I wrote “You Got What I Need;” it’s from the girl’s perspective. It kind of explains that little awkward dance before they get proposed to.

There’s one song where my friends and I were talking about, that there’s all these annoying things that you kind of embrace with people you’re with, and so I wrote a song called “One in a Million” about that special bond you have with somebody, that with anybody else it would be annoying with. Some of them are just ideas and some are more directly related to something that happened in my life.

SK: It seems as though acoustic and the more singer/songwriter type of music has taken a backseat to electronic music — or they’ve merged in one way or another. What are your thoughts on EDM versus the type of music you make?

RW: For the most part, I listen to a lot of different music, and music genre styles all serve some sort of style. I hate to admit it, but man, Selena Gomez’s “Love You like a Love Song” and “Come and Get It”: They repeat on my iPod because it’s super catchy. But I wouldn’t say that those inspire me as a musician or as a songwriter; you know what I mean?

I do think that, as a songwriter you’re able to connect and respect people like John Mayer who write such beautiful songs and you’re inspired by it. But, yeah, I listen to EDM. Even in mainstream pop, you can hear it in Taylor Swift’s “I Knew You Were Trouble” and Demi Lovato’s new song and even Justin Bieber. They have that EDM bass drop in the middle of the song. Everybody’s bringing that in.

SK: You just mentioned John Mayer, Lauryn Hill and Adele. If you could handpick your dream tour, that you’d be headlining, who would be on it?

RW: *laughs* So, Adele would be opening for me. I would love to play with Adele, honestly. And then, she’s more country, but I was the biggest, biggest Kelly Clarkson fan girl. Because when I was like a freshman in high school, that was when the first season came out. I went on the American Idol tour. I went to the concert, and I think it’s great. There’s not that many people that are on those shows that have careers in music post those shows. So I think it’s cool that she’s there. And she’s one of those artists that she just belts it out, you know?

I would definitely say her. Oh, I really love Sara Bareilles, too, so… these are all girls. Sara Bareilles, Adele and maybe James Morrison. I just threw another name in there.

SK: That’s going to be a long show! Well, I wanted to ask about your following in Canada and the Philippines. Were you surprised by just how popular you are there?

RW: It’s honestly the power of social media, man. I use a certain tool to target followers and things like that. It’s stuff that I learned because I work a full-time job in marketing, and so it helps me to do marketing for myself, for my music. And I followed a certain account; it was a radio account. And they were like, “We really like your music.” And then they asked me if they could use my songs to rotate, and so it’s in syndication on this website in the Philippines. It was the same thing with Canada.

RW: My album “Letters to You” is on iTunes and Spotify, so people can pick that up; and my CD release show is in Portland on June 29, and it’s free so people can come. There will be limited edition T-shirts and the physical CD will be available to purchase.

Listen to Rachel Wong’s “Center Stage,”
and let us know what you think!

Other artists we love