Vanessa Lachey is enjoying every aspect of her new family life, from her “hot daddy” husband, Nick, to her baby boy, Camden John. 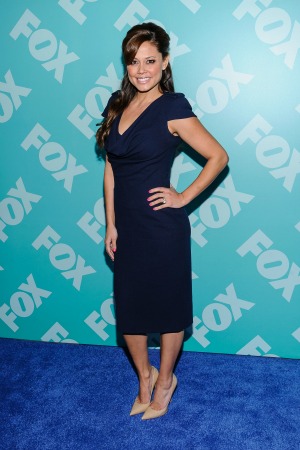 Vanessa Lachey might not be a newlywed anymore, but she’s still crazy for her husband, Nick. In an interview with HuffPost Live, the host said her husband is a “hot daddy.”

The couple, who married in July 2011 on Richard Branson’s Necker Island, became new parents in September 2012 with son Camden John. Lachey opened up to the news site about her role as a mother.

The Wipeout host shared, “Don’t rush into parenthood if you’re not ready to be a parent.”

Nick Lachey wants to put your kids to sleep >>

But the duo was definitely ready to have a family, and Lachey talked glowingly about her husband’s skills as a parent.

In fact, being a wife is extremely important to the 32-year-old. The marriage is the No. 1 priority in her life, which is why she even changed her last name.

Lachey revealed, “I see myself as his wife first, before a personality or a name.”

She also offered up some refreshing advice to new moms when it comes to losing that baby weight.

“I gained, I think, 65 pounds when I was pregnant,” Lachey said. “And I will say to moms out there, ‘Don’t stress about losing it. It will happen when it happens.’ Cam’s 9 months, so it’s been a minute, and we’re working, and we’re traveling, and it’s just about maintaining a happy, healthy lifestyle, not obsessing about it.”

Next up for the actress is a series regular role in Seth MacFarlane’s new comedy, Dads. The show has a six-episode pickup order from Fox.

As for family plans, it sounds like the Lacheys want a big family.

The proud mom said, “We’re married, and I believe we’ve established a great foundation as a couple and now as parents so when two and three and maybe four roll around, we’ll be ready for them.”