Model Kate Upton goes for a ride in nothing but a bikini bottom and a pair of heels and some people have themselves all in a tizzy about it. 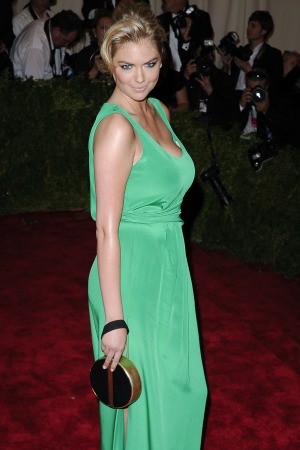 mounted a horse in a bikini bottom (or maybe panties, we honestly can’t tell the difference) and almost nothing else.

No, the model wasn’t trying her hand at a new equestrian sport, she was actually on a (surprise, surprise) modeling shoot. TMZ has a video of the shoot that shows Upton getting on the horse and giving it some loving hugs and pats as she waits for the cameras to be set up. At first, she’s seen wearing a hoodie and has a sarong over her bikini bottom, but once the photographer is ready for action, she strips down to nothing but the bottoms and a pair of heels.

In the video, you can tell Upton has done this a million times and is completely relaxed both on the horse and without her top. She continues to give the animal pats and neck scratches as she simultaneously holds her breasts and poses for the camera. All in all, it looks like a pretty typical photo shoot for a magazine.

In fact, we think the reaction of the boys over at TMZ is much more entertaining than the video itself. They were unable to post the uncensored version of the video, but they did post a vid that shows two of their male staff watching the uncensored version and their reactions are pure comedy gold. It still amazes us how excited grown men get over a pair of naked breasts.

To celebrate Upton’s 21st birthday a couple weeks ago, we did a spread of her most sophisticated photos. Do you think the horse image should qualify for next year’s list?