Bet you thought we were going to say that Miley really hearts her Twitter account, or twerking. Gotcha! Miley seems to be on a one-woman crusade to bring back MC Hammer pants and pantsuits (please, no!). We’ll see if she succeeds, but in the meantime, Miley is hearting her fancy pants. 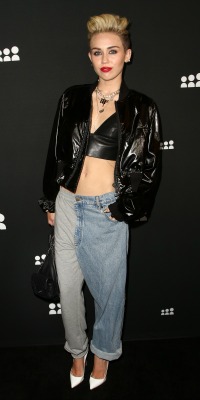 Freaky Friday
We like to call these Miley‘s Freaky Friday pants, because half of them are mom sweats and the other half are teen jeans. These pants seem to be having an identity crisis (like Cyrus herself who is working, perhaps a bit too hard, to shake her Hannah Montana image). 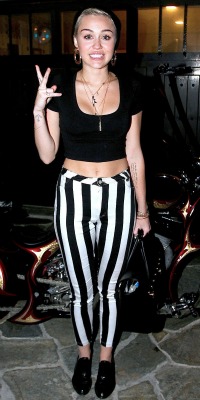 Beetlejuice beauties
The Milester loves her some Beetlejuice pants — so much that she has more than one pair in different styles. What we love about these pants is nothing. OK, that’s not true. At least Miley is rocking vertical stripes, instead of the dreaded horizontal-across-the-hips stripes that we see so much of in skirts. So she’s got that goin’ for her. 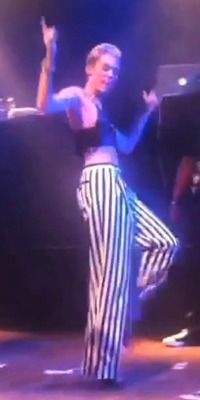 Clown pants
It can’t be easy being Miley right now. There’s constant speculation about her engagement to Liam Hemsworth, her parents are divorcing and her fascination with twerking is making her the butt of jokes everywhere. But a gal has to let off some steam occasionally, right? Here Miley is cutting loose in her twerk-ready clown pants, inspired by Beetlejuice.

Billy Ray Cyrus: Couples whose celeb kids broke them up >> 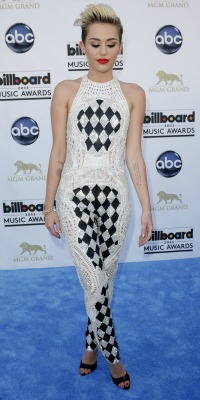 Mad Hatter
Hey Miley, Alice in Wonderland called and the Mad Hatter wants his pantsuit back. Aw, we’re just kiddin’, Miley. We love ya. If anyone can pull off this monochromatic masterpiece it’s you. Ms. Cyrus is taking some risks with her image and we applaud her for that. Now where are our checkers?

Stay up on all things Miley! Subscribe to our newsletter >> 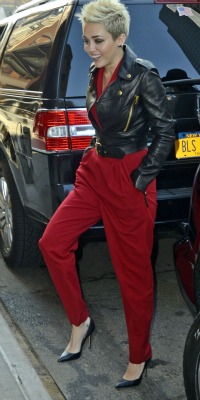 Hammer time
You can’t touch this. Miley is bada** in this MC Hammerish pantsuit with heels and a leather jacket. Is there an end in sight for Miley’s adoration of pantsuits? Nope. She’s too legit to quit. 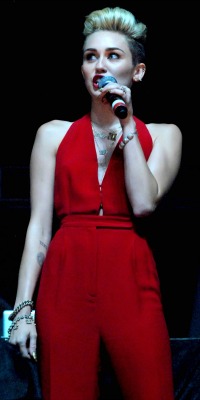 Jessica Rabbit
There is something about Miley in this pantsuit that reminds us of Jessica Rabbit. She looks freakin’ amazing, but lord help us all if this look comes back. First, you have to be painfully thin to carry it off as evidenced by Cyrus’ tiny figure. Second, we wore pantsuits in the ’80s, and here’s what we remember: pulling material out of places it doesn’t belong. You dig? As cute as this looks on Miley, we’re keeping our fingers crossed that she moves on to something else before this catches on.