Stephen Colbert put aside the jokes yesterday to make a touching tribute to his mother. 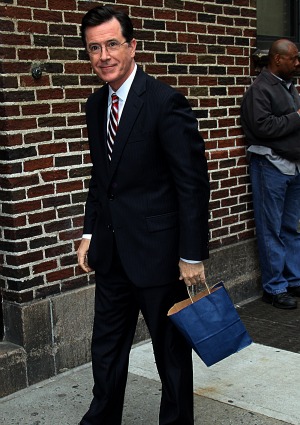 The opening minutes of The Colbert Report are usually reserved for sharp-tongued satire, but last night star Stephen Colbert used his platform for a higher purpose: A touching tribute to his late mother Lorna.

The 92-year-old, who died last week, raised 11 children (including the TV star’s sister who recently lost her bid for Congress) and a tearful Colbert explained to his audience how much she meant to them.

“If you watch this show and you also like me, that’s because of my mom,” he explained.

“She made a very loving home for us. No fight between siblings could end without hugs and kisses, though hugs never needed a reason in her house. Singing and dancing were encouraged, except at the dinner table. She had trained as an actress when she was younger and she would teach us how to do stage falls by pretending to faint on the kitchen floor. She was fun.”

Colbert explained that Lorna “knew more than her share of tragedy, losing her brother and her husband and three of her sons, but her love for her family and her faith in God somehow gave her the strength not only to go on but to love life without bitterness and to instill in us a gratitude for every day we have together.”

Though she grew confused during her final days, Colbert shared that she remembered a prayer she recited with her kids when they were tots.

“Her favorite memory of prayer was as a young mother tucking in her children,” he continued. “We were the light of her life and she let us know it to the end.”