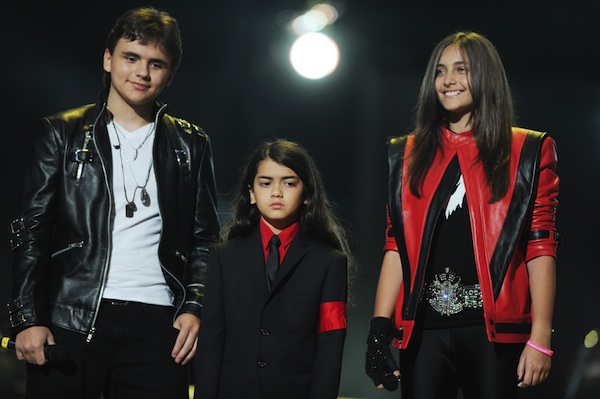 As the wrongful death case of Michael Jackson carries on against massive concert promoter AEG, the tapped depositions of Michael’s children were played in court today. Paris Jackson gave sworn testimony in March 2013 — just two months before her suicide attempt — and revealed her longtime nanny, Grace Rwaramba, was “obsessed” to a “creepy” degree with her dad.

Life after Michael Jackson’s death: a family feud pushes Paris to the edge >>

The testimony Paris provided is largely for AEG’s defense. RadarOnline reports Grace Rwaramba was perceived by many to be a surrogate mother to the Jackson kids and unfairly fired by AEG in the months before Michael Jackson’s death.

While the portrait of Rwaramba is set up to make AEG look cold, calculating and neglectful, Paris Jackson’s own words starkly contradict the rosy, nurturing image of her longtime nanny.

Paris sported a jet black cropped haircut and explained to lawyers that Rwaramba was “obsessed” with Michael Jackson and was “creepy.” Paris said her dad confided to her and her siblings that he did not like Rwaramba.

“[My dad] said she was sneaky. She wasn’t an honest person. And she lied a lot.” The only daughter of the late music icon told lawyers for AEG that Michael’s compassion for the woman’s dire financial situation prevented him from letting her go.

Lawyers were clearly shocked at the recounted story. Instead of firing Rwaramba, Paris said her dad ended up sending the nanny to “India to get some stuff” in order remove her from their home without terminating her employment.

The prosecution in the wrongful death case against AEG is set to rest its case July 8.