Break out your mustache — Ron Burgundy is in the building. Will Ferrell’s alter ego has returned for Anchorman: The Legend Continues. Paramount’s released a new trailer that shows the tides of change. 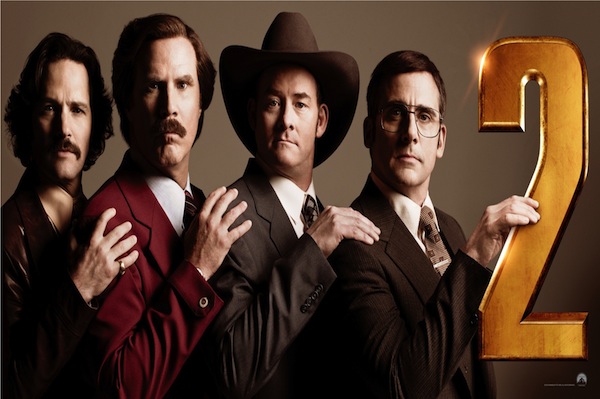 This December, the legend continues. Ron Burgundy (Will Ferrell) and his Channel 4 News Team are back on the scene. Unfortunately, the landscape of broadcast journalism has changed. Burgundy’s in a rut, and drastic times call for drastic measures.

The ’70s are behind him and he’s tackling the decade of excess — the ’80s. He reunites with his partners: weather man Brick Tamland (Steve Carell), man on the street Brian Fantana (Paul Rudd) and sports guy Champ Kind (David Koechner), to headline New York’s first 24-hour news channel.

Burgundy’s biggest competition is a good-looking anchor played by James Marsden. He’s threatened by his photogenic face and impressive resume. Burgundy definitely has his work cut out for him. Even though he’s married to Veronica Corningstone (Christina Applegate), it looks like he’ll mix it up with another woman played by Meagan Good (NBC’s Deception).

The first Anchorman hit theaters in 2004, shortly after Ferrell left Saturday Night Live and before Carell struck gold with The Office. It’s great that everyone was able to come together for one more hilarious adventure. Not only did the original cast return, but so did director Adam McKay. The gang’s all here!

Anchorman: The Legend of Ron Burgundy wasn’t a huge box office success ($90 million worldwide), but it became a cult favorite on DVD. It took nearly a decade, but the sequel is upon us.

What do you think of the new trailer for Anchorman 2?