The eldest member of the 19 Kids and Counting Duggar clan is headed to Washington, D.C. Josh Duggar will take a job with the Family Research Council. 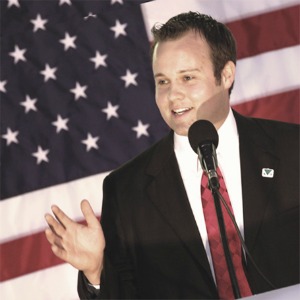 Washington, D.C. is going to get a bit more crowded now that 19 Kids and Counting star Josh Duggar and his growing family are moving there. The eldest Duggar is taking a job with the Family Research Council.

The TLC star was on FRC President Tony Perkins’ radio show on Monday to announce the news. He will serve as the executive director of FRC Action, which is a branch of the conservative group.

The father of three said, “I will be engaging the grassroots and taking the message of faith, family and freedom all across America.”

Duggar has been working as a political consultant since 2006 and was active with his parents, Jim Bob and Michelle, for former Senator Rick Santorum’s 2012 presidential campaign.

The FRC Action group states seven areas that are true to its beliefs, including “Constitutional and legal protections for life in all stages from conception to natural death,” and “Preference in public policies for heterosexual marriage and the traditional family.”

The news also inspired GLADD spokesperson and actor Wilson Cruz to post an official statement on the group’s blog.

Cruz wrote, “If Josh Duggar wants to make a living dehumanizing and denigrating LGBT people and their families, that’s his business, but FRC’s lies and stereotypes need to be treated as such. Josh’s new boss, Tony Perkins, has actually accused LGBT equality advocates of being pawns of the devil. Fans of his family’s reality show ought to know that.”

The controversy didn’t seem to bother Duggar, who tweeted with excitement about his career move.

He said, “So grateful for this opportunity to serve!”

Duggar and his family are expected to move to the nation’s capital at the end of June.