They’re The Monkees of this generation and if you don’t know them, chances are your tweenager does. Check out Big Time Rush’s new video “24/seven.” 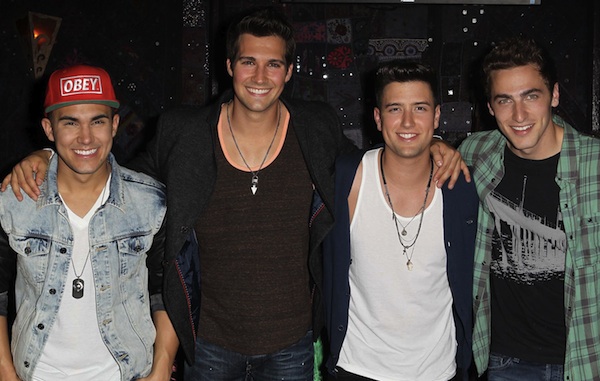 Do you know about Big Time Rush?

If you have a tween in your house, you probably do.

Big Time Rush is the name of a Nickelodeon series about four good-looking hockey players from Minnesota who go to Hollywood and become a boy band. It is also very conveniently the name of said band.

Backstreet’s back with a new song, new album and a world tour >>

Think The Monkees if Davey, Mickey, Peter and Mike were non-threatening, accent-free versions of guys from the Jersey shore.

The show is chock-full of goofy lines, slapstick and canned laughter — and it had the biggest live-action debut of any show on Nickelodeon.

Needless to say, Kendall, James, Carlos and Logan are racking up Kids Choice Awards nominations, all while living the life and having fun — which also happens to be the theme of all of their songs.

The guys just released the video for their new single “24/seven” and it’s exactly what you’d think it is: four cute guys dance (semi) in sync, goof around and candidly pose for the camera.

All the while they sing, “All day every day is a holiday. We’re all right 24/seven,” and, “It doesn’t matter where you’re from. We’re all together here as one. Tomorrow comes, we’ll do it all again.”

But truthfully, while Miley is twerking and Ke$ha is brushing her teeth with bottles of Jack, isn’t this exactly the kind of thing that we should have our tweens listening to?

Check it out for yourself and let us know what you think in the comments below.