Ivanka Trump — reportedly worth $150 million — says she will not tolerate any “spoiled or bratty behavior” from 2-year-old daughter Arabella Rose. 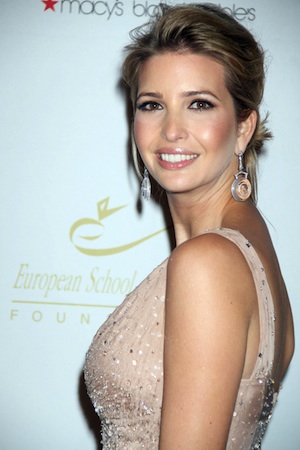 Ivanka Trump might be considered American royalty but despite her reported $150 million net worth, Ivanka says she will not tolerate daughter Arabella’s “spoiled” or “bratty” behavior.

The gorgeous 31-year-old socialite and accomplished real estate executive gave an exclusive interview to Us Weekly and offered the public some insider details on her parenting style.

Ivanka Trump announces baby No. 2 is on the way! >>

Ivanka was absolutely a glowing mom-to-be when the celebrity magazine asked her about her first two years of mommyhood.

“I don’t really know what kind of mom I am just yet. [Arabella’s] only, well, she’s not even 2 so she hasn’t really thrown me the challenges of a teenager so we’ll see how much of a disciplinarian I am. I have a feeling I’m going to be pretty strict.”

Ivanka Trump: Every mom is a working mom >>

Ivanka continued, “My mother was [very strict] with me. She laid down very concrete guidelines, the concept of ‘Because I said so’ was a totally viable answer.” Laughing, Ivanka says she recognizes that such rigid parenting styles may be a bit out of style. “[It’s] changed a lot now, parents are more likely to explain themselves. But we’ll see.”

One thing is certain: Arabella Rose Trump will not suffer from an entitlement complex. “The one thing I won’t tolerate is her being spoiled, her being bratty, or having poor manners. That’s an area I’ll be very strict.” On a similar note, Ivanka says little Arabella is still in the midst of a challenging childhood milestone: learning to share.

“I’m trying desperately to teach Arabella how to share. The concept so far seems… to be lost on her.” Smiling, Ivanka explains her daughter’s mindset. “She’s really good at tell[ing] me that I need to share with her… she offers to share but when you get close she pulls [the item] back. So I think we’re like 70 percent of the way there.”