We can’t stop watching the video for Cyrus’ “We Can’t Stop.” 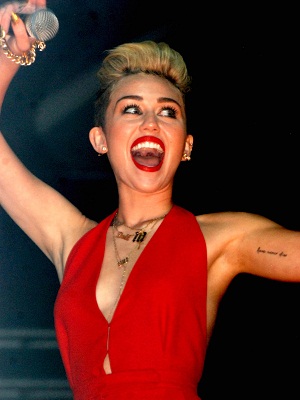 Things have been rough for Miley Cyrus lately. Rumors of a split from her hunky fiancé, Liam Hemsworth, are running on high. Her parents are getting divorced. She even tweeted that she can’t get her own pops to pick up the phone. With all that going on, sometimes a girl just needs to let loose.

That’s exactly what she did in her new video for “We Can’t Stop.” The music video is, in essence, footage of what is supposed to be a kind of weird but sexy party. Honestly, it looks more like a video that should be put out by Ke$ha than Hannah Montana. Here are just a few of the things you’ll witness during the 3:33 song:

There are so many WTF moments in this video. There’s no way her father could have been on set. Cyrus spends a good portion of her time in the video writhing around in white spandex and massive platform shoes or splashing around in a black mesh bathing suit.

Still. It’s a party we’d want to attend. There are hot guys, everyone is smiling and there’s a massive sense of love that seems to fill each room. And by “love” we mean the tweaked-out on X variety, not the ring-wearing type.

“We Can’t Stop” is the first single of Cyrus’ fourth album, which is due to hit shelves later this year. If the song is any indication of the rest of the album, you can bet it will be a chart-topper. Its funky and urban vibe is a pretty far cry from Cyrus’ country and Disney Channel roots. But that’s definitely a good thing.