A’s latest attack could ruin the dreams of one of the Liars. 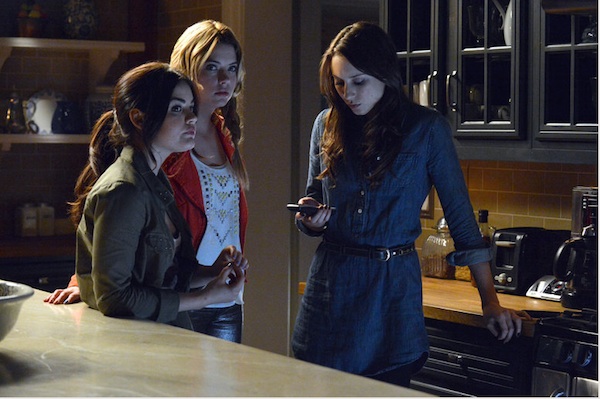 A few major things went down in the latest episode of Pretty Little Liars that may jeopardize the future of some of the Liars and their families.

First off, Mona took the girls to the RV, but it had mysteriously been moved, which led the Liars to trust Mona even less. But almost immediately, Mona was attacked by a masked “A” in her car and luckily managed to escape. “A” (we can only assume that’s who it was) then took the wheel of the car and tried to run over Mona, Emily (Shay Mitchell) and Aria (Lucy Hale). Emily came to the rescue, pushing the girls out of the way, but wound up taking a hard fall on her shoulder.

Emily’s shoulder injury is bad enough that it could affect her swimming abilities, and with an important race around the corner, it could also affect her chances of getting on the Stanford swim team and her future with Paige. So, she decides that taking a few extra painkillers is a good solution. This turns into a horrible idea when the drugs make her so loopy during her swim meet that she winds up ramming her head into the side of the pool.

SheKnows Poll! Which outfit of Aria’s is crazier? >>

Hanna (Ashley Benson) pays a visit to Ali’s mom where she learns that Ali’s grandma’s bird is repeating phrases it overheard Ali say. Mrs. DiLaurentis gives Hanna the annoying bird and the girls discover the annoying song it keeps singing is actually the sound of a phone number being dialed. But, when the girls go to record the bird to figure out the pattern, they discover “A” has already bird-napped their newest lead.

Stay up to date on all PLL news! Subscribe to the SheKnows newsletter >>

On a more personal note, Hanna starts to suspect that her mother actually killed Wilden. Her high heels were covered in mud and apparently the investigators discovered two shoe prints at the scene of the fire. One certainly belonged to Wilden and another to a woman in heels. And those heels are probably covered in mud.

Although she denies any involvement in the murder, Hanna’s mom did admit to coming back from New York early to confront Wilden.

Did Hanna’s mom kill Wilden? If not, “A” certainly has enough evidence against her to frame her for it.