After 20 years of being together, the Backstreet Boys are celebrating by launching a new single, a new album, and a world tour. 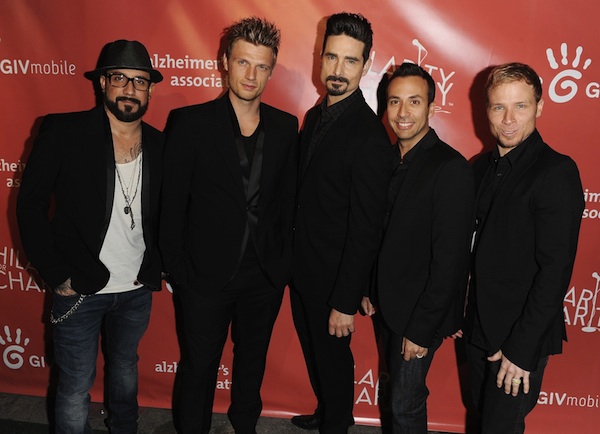 It’s like 1993 all over again. Nick, Howie, Brian, AJ and Kevin are back together, best friends and in my mind, writing love songs about me.

And while a lot of things get better with age, the Backstreet Boys had to work hard to regain the relationship they once had with one another.

In an interview with Rolling Stone, AJ explained that to rekindle that BSB magic, they lived together in a house in London and bonded.

Now there’s a reality show I’d watch — The Real World: Backstreet. Come on, I can wish.

The end product of their bonding is their new album In a World Like This, due out July 30.

Plus, the Boys just released the title track from their album. This is definitely a new and grown-up Backstreet.

98 Degrees has some boy band advice for One Direction >>

In the chorus, they sing, “In a world like this/ Where some back down/ I know we’re gonna make it.”

Of course, these guys aren’t the same youngsters we fell in love with 20 years ago.

Said 41-year-old Kevin Richardson, “We’ve grown up, our fans have grown up. Now four of us have kids, four of us are married, Nick’s engaged, we have a lot more to talk about now.”

But don’t think that we’re not going to see those old fun BSB dance moves we watched at their concerts, screaming while tears streamed down our faces. Oh, wait. Was that just me?

AJ said, “We’re bringing back old choreography, stuff that people haven’t seen in probably 15 years, from the hat routine to the original ‘As Long As You Love Me’ mic routine.”

Find out which movie star was almost a Backstreet Boy >>

We have the new song for you right here, and you can check out the tour dates below.

Backstreet Boys “In a World Like This” Tour Dates: