Brad Pitt and Angelina Jolie are encouraging their children to get into acting, and it looks like Maddox is the latest to join a film. But that doesn’t mean he will make it out alive. 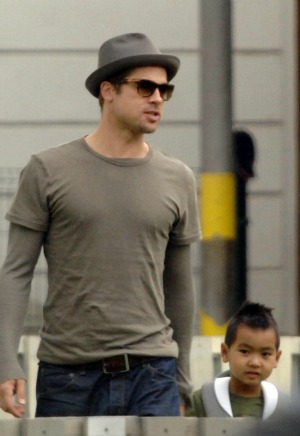 Brad Pitt’s big summer film World War Z comes out Friday and it looks like he has made the movie a family affair.

Pitt and Angelina Jolie’s children have begun making appearances in their parents’ movies, and the latest venture involves their oldest son, Maddox Jolie-Pitt, who will be making a cameo in World War Z. But this time, it won’t end well.

“He gets shot in the head . . . multiple times,” Pitt told Us Weekly at the film’s New York premiere. “But he gets double tapped. I don’t know what that says about me as a parent.”

The comment means Maddox will likely play a zombie in the movie, based on the book of the same name by Max Brooks, in which the world is overrun by the living dead.

Pitt said Maddox, 11, and his 9-year-old son Pax “have already seen it and they love it.”

One of the other young actors in the movie, Fabrizio Zacharee Guido, said he “became really good friends” with Maddox.

“They’re so much fun. They’re just normal kids,” he told Us Weekly. “We rode bikes and played video games.”

Mireille Enos, who plays Pitt’s wife in the movie, also had nothing but good things to say about Maddox’s dad and seems genuinely impressed by his parenting skills.

“He has really great dumb dad jokes that he would bring in for the kids,” Enos said. “Like the best, really stupid jokes for the kids that were working.”

World War Z, a labor of love for Pitt, has been in progress for many years.

While reviews have already pointed to the fact the movie is not that similar to the book on which it is based, it is getting reviews as a good movie by itself (Time’s review seems go so far to say the significant differences between the movie and book shouldn’t bother you. If you want to read the book, you should read the book. Then “you can imagine your own perfect movie adaptation”).

World War Z will be in theaters nationwide Friday, June 21.