Miley Cyrus has many loves in her life, including Liam Hemsworth and her home state’s marijuana laws. Perhaps that’s why she’s earned such a dubious honor? 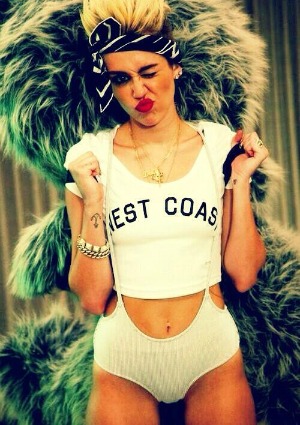 Miley Cyrus, who recently took the No. 2 spot in a poll of worst celebrity role models, is coming clean about what she really thinks of marijuana.

When Rolling Stone asked the “We Can’t Stop” singer if her stoner reputation holds any truth, she replied, “You can’t ask someone that and expect them to say yes! I did a song with Snoop Dogg called ‘Ashtrays and Heartbreaks,’ so people can put it together for themselves.”

The 20-year-old daughter of soon-to-be divorced Billy Ray Cyrus and Tish continued, “I think alcohol is way more dangerous than marijuana — people can be mad at me for saying that, but I don’t care. I’ve seen a lot of people spiral down with alcohol, but I’ve never seen that happen with weed.”

She added, “As long as it isn’t illegal, there are far more dangerous things. And it’s legal in the state of California. So I’m happy to live in California, a place where you can be whoever you want to be.”

Miley Cyrus wears jeans and sweatpants… at the same time! >>

It seems the singer’s newly loosened filter is causing her popularity to nosedive with at least one demographic.

In a recent survey conducted by CouponCodes4U, Miley Cyrus earned the disdain of 68 percent of the 2,047 parents who participated. The former Hannah Montana star was only beaten out by Chris Brown, who earned a 71 percent disapproval rating, while Kanye West came in at 67 percent and Kim Kardashian at 63 percent.

“I’m too honest. But this is who I am,” Cyrus went on to explain to Rolling Stone of her no-holds-barred nature. “I can’t sing ‘We Can’t Stop’ and then be some shy, closed-off person. The reason I never really loved acting was because you can’t be yourself. I don’t want to be an actor — I want to be an artist.”

However, she didn’t have much to say when it came to fiancé Liam Hemsworth.

When asked about the current status of their relationship, she replied only, “I wear a ring every single day. I don’t talk about my personal life, so that’s enough of an answer.”

Take a listen to Miley Cyrus’ “We Can’t Stop” here: