While making an acceptance speech for an honorary doctorate from Hebrew University in Jerusalem, Barbara Streisand speaks out about women’s rights. 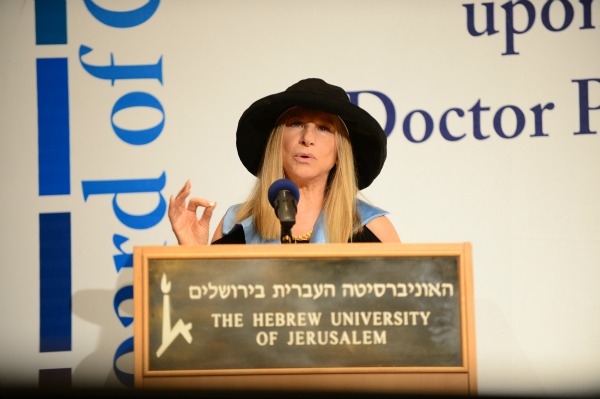 Barbra Streisand took a stand for women’s rights while making an acceptance speech for an honorary doctorate of philosophy degree from Hebrew University in Jerusalem, Israel, on Monday. The singer was recognized for her “professional achievements, outstanding humanitarianism, leadership in the realm of human and civil rights, and dedication to Israel and the Jewish people.”

Streisand, a longtime supporter of human rights, took the chance to talk about some of the ultra-Orthodox Jewish religious practices that discriminate against women.

“I realize it’s not easy to fully grasp the dynamics of what happens in a foreign land, but it’s distressing to read about women in Israel being forced to sit in the back of the bus, or when we hear about Women of the Wall having metal chairs thrown at them when they attempt to peacefully and legally pray, and that women can’t sing in public,” she said. “To remain silent about these things is tantamount to accepting them.”

CBS News reports that Streisand made the speech in reference to some isolated incidents in which ultra-Orthodox men tried to force women to sit separately at the rear of buses that go through their neighborhoods, as well as more serious clashes that involved ultra-Orthodox Jews who tried to prevent women donning prayer shawls and carrying Torah scrolls from praying at the Western Wall in Jerusalem, which is the holiest site where Jews can worship.

According to traditional Orthodox Jewish practice, only men wear are allowed to wear prayer shawls and handle Torah scrolls, though that practice is slowly beginning to change in some places. Many ultra-Orthodox Jews fear that allowing women to make such inroads will erode their authority. But Israeli Justice Minister Tzipi Livni has introduced legislation that has made forced separation of men and women in public places like buses illegal. As for the issue of women praying at the Western Wall, a court has upheld the right of women to wear prayer shawls, and a proposal has also been made to set aside a section of the Western Wall for mixed-gender prayers.