While leaving a Sunset comedy club on Monday night, Justin Bieber pinned a paparazzi between his Ferrari and another car, bringing out the LAPD to investigate.

Not that long ago, we reported that Justin Bieber wanted to take a flight into space, and after reading the 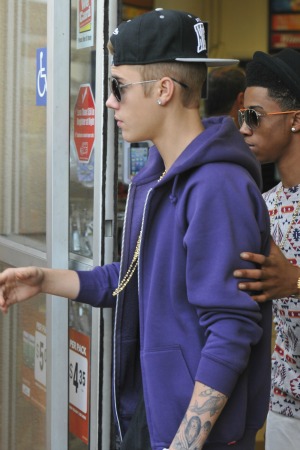 news we’ve got today, you may decide that he’s better off in the stars. Bieber has been causing quite the ruckus recently. Just last week we found out that he was being sued by a photographer for an incident with a gun and now it looks like he’s been in an accident involving his car and a paparazzi.

CNN reports that the incident occurred when Bieber was leaving a comedy club on Monday night with rapper Lil Twist. Bieber’s Ferrari was surrounded by paparazzi as he attempted to drive away and one of the photographers became pinned between Bieber’s car and another vehicle.

The unidentified pedestrian sustained some injuries but they were reportedly not life-threatening.

This is far from the first time that the singer has had driving issues. Last month police responded twice to reports that Bieber had been seen speeding around his gated Southern California community. And last July, he was involved in another incident with paparazzi that resulted in a high-speed chase with them on a Los Angeles freeway. In November he was cited by police for making an unsafe left turn and having an expired registration. When it comes to cars and Bieber, it looks like the two just don’t mix, especially if you’re a photographer just waning to get a cool picture of the Biebs.

A representative for Bieber had no immediate comment on the most recent incident.