As everyone with a heartbeat worldwide knows, Kim Kardashian and Kanye West welcomed a baby girl into the Kardashian clan Saturday, June 15, allegedly a month early. Why do we say allegedly? We’ve pieced together a (somewhat) compelling argument that Kim punked the public with her due date. 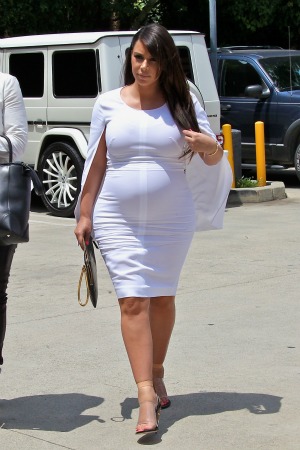 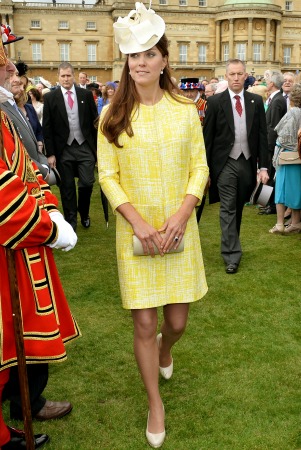 This bun is cooked!

The next royal member of the family and the next reality TV superstar were both due about the same time. Kate Middleton and Kim Kardashian were both due mid-July. Look at both of these images, taken six days apart in May, with Kate’s being taken six days after Kim’s. Kim’s goose looks cooked, so to speak, and Kate barely looks pregnant. In fairness, Kim’s um, “ass”ets have always been larger than Kate’s and Kim is only 5’3” while Kate is 5’10”. The Duchess of Cambridge has a lot more room to hide a baby. Still, for women who were due at approximately the same time, these images show a stark comparison in tummy size (which doctors use, in conjunction with other things, to track the due date).

Kim Kardashian hosted her baby shower June 2. Kate Middleton, the darling royal rebel that she is, is breaking tradition and is going to have a baby shower. However, with Kate’s due date about a month away, there are no rumored dates and the shower has not taken place. Did Kim know that her baby was going to be born mid-June and that’s why the shower was early June? Makes you wonder, doesn’t it? No? OK, well, we’re not done with our argument.

Let’s say you’re Kim Kardashian and you can’t go to the bathroom without it being photographed and reported on the Internet. Wouldn’t it behoove you to throw the hounds off the scent a bit so that you can maintain a bit of the privacy and sanctity most of us enjoy when we welcome a new member to our family? Wouldn’t it be sheer brilliance for Kim to stage a fake due date? Yes, we fully recognize that we are probably giving her way too much credit, but she didn’t get where she is by being stupid.

It’s completely conceivable that Kim’s baby was born premature, but the family’s immediate tweets only talk about the joy of the arrival and don’t say a single word about the baby being a month early. A baby being born a month early is significant — it’s not like it was a few days. With a baby born this early there is usually talk of under-developed lungs, overnight stays in the NICU, etc.

How will we ever know? We probably won’t, and who really cares, right? However, if the first pictures of baby Kimye reveal a healthy 8-9-pound butterball baby, we’ll know Kim punked us all.